You can't handle the truth 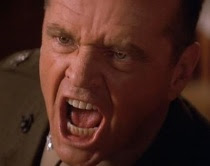 Mr Kohn, the US Federal Reserve vice-chairman, said providing the names of the counterparties would discourage institutions from dealing with AIG in the future for fear of being exposed, and could dissuade any other financial institution from receiving government funds.

"My judgment would be that giving the names would undermine the stability of the company and could have serious knock-on effects to the rest of the financial markets and the government efforts to stabilise them," he said. Mr Kohn said the Fed would take the issues raised by the senators into consideration. He conceded that by bailing out some of AIG's counterparties, it had created "huge moral hazard".

"I wish with every fibre in my body that we didn't have to come in and do what we did," he said. "Our judgment was that if we inflicted losses on counterparties it would undermine confidence."

(So it was Code Red eh Mr. Kohn ... golly do you think anyone really wants to work with AIG in the future? Too bad we can't handle the truth as to who the counterparties are... given that we, the taxpayers, are bailing out their speculative bets. Who can we turn to for answers given the recalcitrant Federales? Paging MOD(Master of Disaster) Roubini... -AM)

Given that common shareholders of AIG are already effectively wiped out (the stock has become a penny stock), the bailout of AIG is a bailout of the creditors of AIG that would now be insolvent without such a bailout. AIG sold over $500 billion of toxic credit default swap protection, and the counter-parties of this toxic insurance are major U.S. broker-dealers and banks.

News and banks analysts' reports suggested that Goldman Sachs got about $25 billion of the government bailout of AIG and that Merrill Lynch was the second largest benefactor of the government largesse. These are educated guesses, as the government is hiding the counter-party benefactors of the AIG bailout. (Maybe Bloomberg should sue the Fed and Treasury again to have them disclose this information.)

But some things are known: Goldman's Lloyd Blankfein was the only CEO of a Wall Street firm who was present at the New York Fed meeting when the AIG bailout was discussed. So let us not kid each other: The $162 billion bailout of AIG is a nontransparent, opaque and shady bailout of the AIG counter-parties: Goldman Sachs, Merrill Lynch and other domestic and foreign financial institutions.

So for the Treasury to hide behind the "systemic risk" excuse to fork out another $30 billion to AIG is a polite way to say that without such a bailout (and another half-dozen government bailout programs such as TAF, TSLF, PDCF, TARP, TALF and a program that allowed $170 billion of additional debt borrowing by banks and other broker-dealers, with a full government guarantee), Goldman Sachs and every other broker-dealer and major U.S. bank would already be fully insolvent today.

(Thanks for the script of truth serum Dr. Doom.-AM)
Posted by Anonymous Monetarist at 11:20 AM