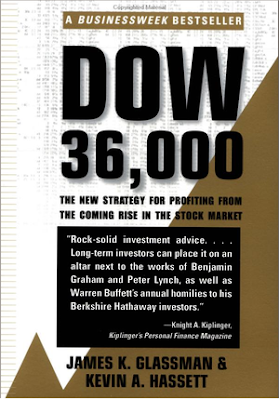 (OK, I'm torn ... Barron's runs a cover that states DOW 5000 not likely (bearish indicator) and WSJ runs an article entitled : Dow 5000? A Bearish Bet That Looks Quite Possible (bullish indicator). What's a greedy contrarian to do? -AM)

Just how low can stocks go?

Despite Friday's small gain, the Dow Jones Industrial Average marked its fourth consecutive week of losses as it tumbled through the 7000-point mark and spiraled to new 12-year lows. The Standard & Poor's 500-stock index is trading below 700 for the first time since 1996.

As earnings estimates are ratcheted down and hopes for a quick economic fix fade, the once-inconceivable notion of returning to Dow 5000 or S&P 500 at 500 looks a little less far-fetched.

Analysts and investors looking at valuations, history and stock-price trends are mostly predicting the indexes will avoid plumbing those lows, although all concede that, in this market, anything is possible.

Even Wall Street strategists are crunching the numbers, while sticking to forecasts of a second-half rally.

Goldman Sachs's David Kostin in late February presented three scenarios for the S&P, including a "bear case" that put the index at 400 to 500. Although Mr. Kostin says he doesn't anticipate the index will fall that low, "these are the cases that different types of investors are making," he says.

The current 2009 earnings estimate for S&P companies is about $64 a share, down from about $113 last April, according to S&P. Goldman is now predicting $40, having cut its forecast from $53 in late February. Bank of America Merrill Lynch estimates $46 a share, and Citigroup is predicting $51.

Mr. Kostin himself offered his own prognosis, in which the S&P stays between 650 and 750 and possibly rises to 940 at year end. Goldman's earnings prediction includes write-downs and provisions, Mr. Kostin adds. But as financial companies recognize a significant amount of remaining losses in the next couple of quarters, investors, he says, could shift their focus to 2010 and what 2009 earnings might look like before write-downs and provisions -- a figure he puts at $63.

Whether stocks continue to fall "boils down to confidence," says Chris Guinther, president and chief investment officer of Silvant Capital Management. Mr. Guinther argues that without clear signs that the government stimulus and rescue packages are working, investors have little incentive to buy.

A level of 500 on the S&P is "possible, but I wouldn't put it in the realm of probable," says Thomas Lee, chief U.S. equity strategist at J.P. Morgan. Mr. Lee on March 2 removed a tentative "buy" recommendation he had placed on the S&P in February.

A level of 500 would take declines for the S&P to 68% since its October 2007 high, compared with the peak-to-trough depression-era slump of almost 90%.

Still, Mr. Lee sees a tentative bottom for stocks in mid-2009, together with a trough in the economy. From there, he is still "really comfortable" with the prospect of the S&P heading toward 1100 by year end.

"People say [government policy] hasn't worked yet, and there have been slips in the execution, but I would say things could be much worse. It will put a bit of a floor under the declines," Mr. Sylla says. That said, he thinks stocks aren't at their lows yet, and guesses the Dow will bottom near 6000.

There are those of course, who think the whole decline is overdone.

"Analysts are just slashing numbers and people are trying to extrapolate that earnings plunge into Dante's Inferno," Citigroup's chief U.S. equity strategist, Tobias Levkovich, says. Mr. Levkovich is keeping a year-end target of 1000 on the S&P.

He says a high single-digit P/E ratio isn't necessarily a valid assumption. In other periods when stocks were similarly valued, inflation, interest rates and risk premiums all were higher, he says.

Some analysts who look at stock price trends see the indexes heading much lower.

His firm's targets are 500 on the S&P and 5500 on the Dow, using charts of buying and selling trends. A small bounce may come around 650 for the S&P as short sellers take profits around that level, Mr. Strazzullo says. Long-term buyers have also been "active" at about those levels and may help push prices higher temporarily, he says.

"Some people may say that is the bottom, but I think there is another leg to go on this," Mr. Strazzullo says. "That last leg will probably be the general public throwing in the towel."

(Even the most bullisht suggesting that S&P 500 at 500 is possible makes this humble blogger go HMMMMMMMMM ...-AM)
Posted by Anonymous Monetarist at 5:52 PM