I spy with my little eye - 10 trillion meatballs... 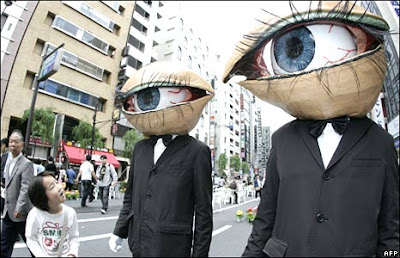 The Fed may be hitting the limits of its ability to heal the economy.

Federal Reserve policy makers end a two-day meeting Wednesday and likely will leave their target for the federal funds rate unchanged at about 0%.

Of greater importance to investors is what the Fed can do next, now that rate cuts are impossible and a smorgasbord of lending programs have doubled Fed assets to nearly $2 trillion.

These efforts have prevented depression, but much more action is needed to ward off deflation, according to an analysis by Goldman Sachs economist Jan Hatzius. Mr. Hatzius estimates the Fed needs to slash the equivalent of eight more percentage points from the fed funds rate by 2010 to beat deflation.

The Fed can't cut rates below zero, but it could achieve the same effect by buying more assets to flood the financial system with cash. The sort of campaign Mr. Hatzius is talking about would stretch the Fed's balance sheet by an eye-popping $10 trillion in addition to stimulus efforts already under way.

Such colossal intervention would essentially turn the financial markets into the Fed's private playground and would be extremely difficult to unwind, Mr. Hatzius notes. And political hurdles could prove insurmountable, given the growing anxieties in Washington and elsewhere that government actions could in fact spark runaway inflation.

Policy makers likely hope their plans so far will be enough to avoid deflation. If they are wrong, much more fiscal stimulus will soon be necessary.
Posted by Anonymous Monetarist at 11:23 AM