Yo, I got yer blueprint right here... 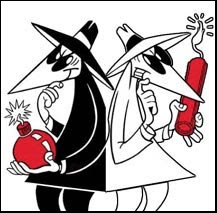 (Trader friend of mine took me to task on my recent Federales laundromat post suggesting that I was being a tad paranoid and that the 'structure' to enact such a plan could not be whipped up overnight. In response please review an article from today's FT that provides a blueprint for the laundromat. Putting a benjamin down that a year or two from now we'll read articles about how a considerable percentage of toxic/legacy/crappy paper was laundered, or if you prefer a more sanitized euphemism, recycled, from the bank to the bank. Be the ball grasshopper ... they're banksters and that's how they roll.-AM)

It would be easy to think that life for all those “financial engineers”, the bankers focused on default probabilities and credit ratings arbitrage who were crucial to the boom in mortgage bonds and other structured niceties, was over – professionally at least.

However, for some the job is busier than ever – and their work is a big part of the bump in first-quarter revenues in the debt businesses of their investment bank employers.

Many of them are now engaged in financial restructuring, which involves dealing with toxic assets and freeing up or protecting capital. But they will not get fanfares in earnings reports because the work they are doing – and have in some cases been doing for more than a year – is very hush-hush.

Their work often began in shoring up their own employers’ balance sheets, but has increasingly become a client business.

This is one reason for keeping the work quiet. There is huge sensitivity over anything leaking into what remains a highly tetchy market for bank securities of all kinds, still beset by the fear of panics.

Even the simple fact that an investment bank has been engaged to work with another bank or company could be enough to spook some investors, it is feared. Specialists at only two banks were prepared to be identified at all in this piece.

But it is not only commercial sensitivity. There is also a feeling among some that financial regulators are behind the curve.

Some of those involved fear that if they speak about it, they may then have to spend many hours bringing regulators up to speed, rather than earning money for their companies.

As one banker put it: “I don’t want to spend the next three days with [my regulator] talking about exactly what I’m doing, how and for whom.” (Oh those pesky regualtors!-AM)

Oldrich Masek, head of global structured solutions, an 18-month-old business unit at JPMorgan, says some of this type of work will not prove sustainable.

“There are still some people out there who are proposing regulatory arbitrage trades to try and generate capital,” he says. “These trades are at best window dressing, which is just not palatable any more.” (Gosh no reason to doubt something he would put this name to eh?-AM)

Quite a few banks, large and small, are active in the field.

Most of these – banks that either had few problems or have cleared them up without being gutted or nationalised in the process – have people chasing such business. Mostly it involves banks, but insurers are increasingly coming into focus.

The work is split between derivatives – unwinding synthetic collateralised debt obligations, for example – and work with cash assets.

According to another structured finance specialist, it is much easier to get rid of derivative exposures.

“The synthetic side, the derivative structures, can be unwound more easily,” he says. “They still lose capital, but it makes the asset go away and frees up the remaining capital, which you cannot do with the cash assets.”

There has been a decade of securitising almost any kind of bond or loan thinkable. But these are real debts that cannot be made to disappear: they must either mature or default. (There is a third option thanks to PPIP.Got a nickel? Make a quarter.-AM)

A lot of the work comes from the need among banks to raise either fresh capital or debt, or both.

This means that they must complete full third-party due diligence and that has been focused on valuing these tricky cash assets.

“Even if capital is raised, clients are still faced with questions as to what to do with troubled legacy assets,” says Mr Masek.

Geoff Smailes, managing director in the credit solutions team at Barclays Capital, says that clients’ issues involve among other things how they finance certain assets, their capital charges and derivatives contracts exposures.

“Many of these exposures have to be either restructured, renegotiated, offloaded or unwound,” he says.

A range of examples about what else clients can do came from the more than half a dozen specialists interviewed for this article.

Banks concerned about problem loan books can look at buying first-loss protection on a pool of assets from investors such as hedge funds. Alternatively, they can retain the first loss and look for insurance on the rest.

Some are also looking at using what they call “new light-weight, non-bank entities”, which will look a lot like small operating companies.

Some talked about seeding new hedge funds to take pools of assets, although others say that option is not economic because of the regulatory capital a bank must hold against an investment in a hedge fund.(Refer to previous comment about those pesky regulators...-AM)

All this work is meant to get banks – and ultimately the financial system – through the current crisis and not all of it is hidden. (The operative phrase is 'not all'.-AM)
Posted by Anonymous Monetarist at 9:58 AM