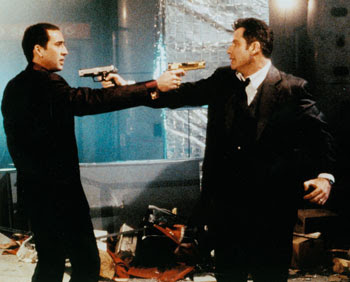 (Either we rip your faces off now or they get ripped off later ... -AM)

Amid the flap over bonuses at American International Group Inc. two of the company's top managers in Paris have resigned. Their moves have left the giant insurer and officials scrambling to replace them to avoid an unlikely but expensive situation in which billions in AIG trading contracts could default.

Representatives of the Federal Reserve, AIG's lead U.S. overseer, are talking with French regulators and AIG officials to deal with the consequences of a complicated legal scenario in which the departures of the managers in Banque AIG, a subsidiary of AIG's Financial Products unit, could trigger defaults in $234 billion of derivative transactions, according to people familiar with the situation and a document AIG provided to the U.S. Treasury.

Defaults, by no means inevitable, could not only hurt AIG but also could force European banks involved in the trades to raise billions in capital to cushion potential losses, according to AIG documents.

That is because the banks used Banque AIG to hedge the risk in some of the assets they own, allowing them to hold less capital against those assets, which could include securities such as mortgages and corporate debt.

The executives at Paris-based Banque AIG, Mauro Gabriele and James Shephard, have resigned in recent days but have agreed to stay on for a transition, according to people familiar with the matter. In the wake of their resignations, AIG must replace them to the satisfaction of French banking regulators.

If they don't, French regulators may appoint their own designee to manage the bank -- an outcome that could trigger defaults under the bank's derivative contracts. The private contracts say that a regulator's appointment of a manager constitutes a change in control, according to a person familiar with the matter; the provision is often included in derivative contracts where parties want to preserve a way out if something about their counterparties changes.

The risk that the Banque AIG transactions would default if managers departed would represent an unexpected problem for what had been one of the AIG Financial Products businesses that hadn't run seriously aground in recent months, according to AIG securities filings.

Banque AIG enabled AIG to generate revenue by helping European banks lower the amount of capital they are required to hold to protect against losses on assets such as mortgage and corporate loans. The bank was set up in the early 1990s, and was licensed by French banking regulators in early 1991. More recently, a Banque AIG branch has been located in London's Mayfair district along with the financial-products unit.

The deals worked like this, according to a Banc of America Securities-Merrill Lynch report and a person familiar with AIG's contracts: A European bank with a hypothetical $1 billion portfolio of assets could unload some of the risk by having AIG protect the top and largest layer, or tranche, against losses with insurance-like derivative contracts. The move greatly reduced the regulatory capital charge for AIG clients.

In May 2007, a British executive in the financial-products office in London told investors: "For the European banks and the Asian banks, this is very much a regulatory capital arbitrage business. By structuring their businesses, whether it's their mortgage lending or their corporate loans into these sorts of trades and tranching the risk up, they're able to significantly reduce the capital they have to hold against their portfolios."
Posted by Anonymous Monetarist at 10:56 AM