Look up in the sky, its' a bund no its' a pound no its' SUPER CURRENCY 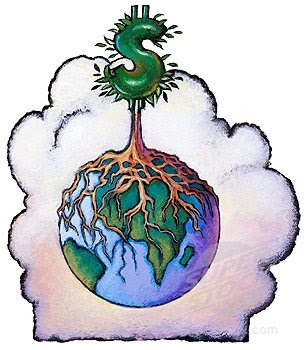 (Is this what Timmy G meant by mobilizing their gold reserves? Kind of an International Exchange Stabilization Fund? -AM)

The International Monetary Fund is poised to embark on what analysts have described as "global quantitative easing" by printing billions of dollars worth of a global "super-currency" in an unprecedented new effort to address the economic crisis.

Alistair Darling and senior figures in the US Treasury have been encouraging the Fund to issue hundreds of billions of dollars worth of so-called Special Drawing Rights in the coming months as part of its campaign to prevent the recession from turning into a global depression.

Should the move, which is up for discussion by the summit of G20 finance ministers this weekend, be adopted, it will represent a global equivalent of the Bank of England's plan to pump extra cash into the UK economy.

However, economists warned that the scheme could cause a major swell of inflation around the world as the newly-created money filters through the system. The idea has been suggested by a number of key figures, including billionaire investor George Soros and US Treasury adviser Ted Truman.

Simon Johnson, former chief economist at the IMF, said: "The principle behind it is that everyone would get bonus dollars and instead of the Federal Reserve having to print them, everyone gets them.

"The objective is to create a windfall of cash. However if everybody goes out and spends the money it could be very inflationary."
Posted by Anonymous Monetarist at 4:40 PM