All I need are some tasty waivers a cool loan and I'm fine. 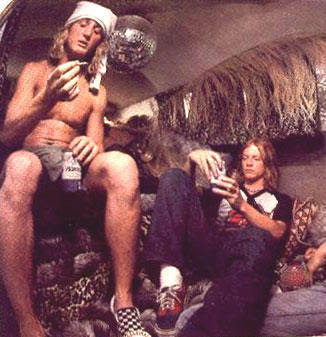 March 13 (boston.com) -For an executive whose bank is under pressure on many fronts, Kenneth D. Lewis sounded remarkably optimistic in Boston yesterday. The chief executive of the nation's largest lender, urged an audience at a lunchtime speech downtown to look beyond the recession now weighing on the country to budding signs of an economic recovery.

March 18 (lse.co.uk)- Banks were mostly higher, helped by comments made by Bank of America Chairman and Chief Executive Kenneth Lewis, who said in an interview in the Charlotte Observer that the largest U.S. bank could repay the $45 billion of government capital it has taken by late 2009 or early 2010, depending on the economy.

March 28 (wsj)- During a meeting with President Barack Obama and other bank executives Friday at the White House, Bank of America Corp. Chief Executive Ken Lewis expressed cautious optimism that the economic downturn was either at or near the bottom of the cycle, according to people at the meeting.

(Well when a captain of industry like Mr. Lewis, the man with his finger on the trigger of the largest lender in these United States of America, opines that he sees budding signs of a recovery and is cautiously optimistic we are at or near the bottom resulting in his fine institution being able to repay TARP funds, you know such sentiment is based on an extensive analysis of the many metrics at his fingertips as he stands at the helm of his....
Waitaminnit. -AM)

March 28 (wsj) -Mr. Lewis mentioned some encouraging comments made recently by West Coast customers of his bank as an example of how the downturn could be nearing a bottom.

(Mr. Lewis what's wrong with a little bullishtness on our time?-AM)
Posted by Anonymous Monetarist at 4:51 PM