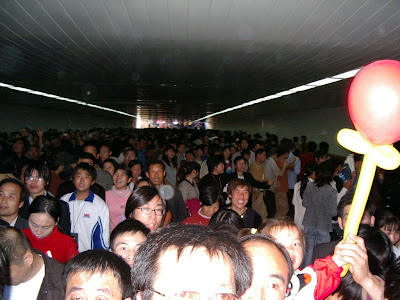 The country’s central bank said the economic outlook was going to bad to worse was still gathering pace, rains the risk that China could tip into a Japan-style deflation trap.

“External demand is shrinking, some sectors have overcapacity, and urban unemployment is rising. Downward pressure on economic growth is increasing. There exists a big risk of deflation,” said the bank. Factory gate inflation has dropped to minus 3.3pc.

“We will use various tools, including interest rates and banks’ reserve requirement ratios, to ensure reasonable monetary and credit growth,” it said. The bank has cut interest rates and relaxed credit rules fives times since September.

China’s economy continued to eke out headline growth of 6.8pc in the fourth quarter of 2008 but all the rise was in the early part of the year. On a month-to-month basis the economy has been flat for several months, and may even have started to contract. Electricity use has fallen sharply. (China IS contracting. Reported numbers are pablum narrative.-AM)

The Shanghai industrial data is being watched closely as a proxy for the country since there is no nationwide data for January owing to the Lunar New Year. The output fall is adjusted for the holidays. The fall in absolute terms was 21pc, year-on-year.

The figures tally with the catastrophic drop in exports from Japan, Korea, Taiwan, and Singapore over the last three months. These countries are an integral part of the supply chain for Chinese industry.

Taiwan said yesterday that export orders to China fell 55pc in January, suggesting that Asian trade will remain trapped in depression deep into Spring. The fall in total orders was 41pc, while industrial output fell 43pc.

Separately, Japan’s finance minister Kaoru Yosano said Tokyo is examining plans to a special body to buy shares in banks to help shore up the stock market after the Nikkei index fell to a 26-year low.

“Excessive stock falls are undesirable. The government will consider what it can do if stock prices fall too much,” he said.

(How do you say ' grip the beads' in Japanese Yosano-san? -AM)
Posted by Anonymous Monetarist at 6:35 PM