I’m shocked, shocked to find that gaming is going on in here 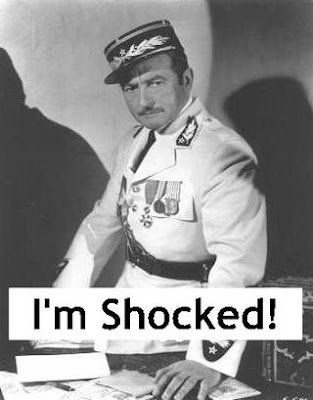 (Hey when the Federales bring the leveraged up buyers to the table banks gotta have something to sell at inflated prices - won't be loans valued at par that's for dang sure- so the obligatory press release can be generated to boost stocks!-AM)

As Treasury Secretary Tim Geithner orchestrated a plan to help the nation's largest banks purge themselves of toxic mortgage assets, Citigroup and Bank of America have been aggressively scooping up those same securities in the secondary market, sources told The Post.

But the banks' purchase of so-called AAA-rated mortgage-backed securities, including some that use alt-A and option ARM as collateral, is raising eyebrows among even the most seasoned traders. Alt-A and option ARM loans have widely been seen as the next mortgage type to see increases in defaults.

One Wall Street trader told The Post that what's been most puzzling about the purchases is how aggressive both banks have been in their buying, sometimes paying higher prices than competing bidders are willing to pay.

Recently, securities rated AAA have changed hands for roughly 30 cents on the dollar, and most of the buyers have been hedge funds acting opportunistically on a bet that prices will rise over time. However, sources said Citi and BofA have trumped those bids.

While some observers concur that the buying helps revive a frozen market, others argue the banks are gambling away taxpayer funds instead of lending.

Around this same time last year some of the same distressed mortgage paper that Citi and BofA are currently snapping up was trading around 50 cents on the dollar, only to plummet to their current levels.

One source said that the banks' purchases have helped to keep prices of these troubled securities higher than they would be otherwise.
Posted by Anonymous Monetarist at 11:39 AM