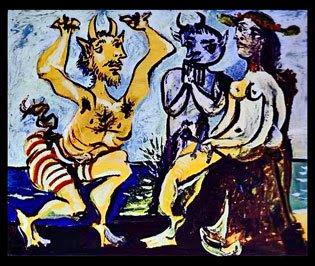 Zero Hedge is rarely speechless, but after receiving this email from a correlation desk trader, we simply had to hold a moment of silence for the phenomenal scam that continues unabated in the financial markets, and now has the full oversight and blessing of the U.S. government, which in turns keeps on duping U.S. taxpayers into believing everything is good.

I present the insider perspective of trader Lou (who wishes to remain anonymous) in its entirety:

"AIG-FP accumulated thousands of trades over the years, all essentially consisted of selling default protection. This was done via a number of structures with really only one criteria - rated at least AA- (if it fit these criteria all OK - as far as I could tell credit assessment was completely outsourced to the rating agencies).

Main products they took on were always levered credit risk, credit-linked notes (collateral and CDS both had to be at least AA-, no joint probability stuff) and AAA or super senior portfolio swaps. Portfolio swaps were either corporate synthetic CDO or asset backed, effectively sub-prime wraps (as per news stories regarding GS and DB).

Credit linked notes are done through single-name CDS desks and a cash desk (for the note collateral) and the portfolio swaps are done through the correlation desk. These trades were done is almost every jurisdiction - wherever AIG had an office they had IB salespeople covering them.

I was mostly involved in the corporate synthetic CDO side.

During Jan/Feb AIG would call up and just ask for complete unwind prices from the credit desk in the relevant jurisdiction. These were not single deal unwinds as are typically more price transparent - these were whole portfolio unwinds. The size of these unwinds were enormous, the quotes I have heard were "we have never done as big or as profitable trades - ever".

I can only guess/extrapolate what sort of PnL this put into the major global banks (both correlation and single names desks) during this period. Allowing for significant reserve release and trade PnL, I think for the big correlation players this could have easily been US$1-2bn per bank in this period."

For those to whom this is merely a lot of mumbo-jumbo, let me explain in layman's terms:
AIG, knowing it would need to ask for much more capital from the Treasury imminently, decided to throw in the towel, and gifted major bank counter-parties with trades which were egregiously profitable to the banks, and even more egregiously money losing to the U.S. taxpayers, who had to dump more and more cash into AIG, without having the U.S. Treasury Secretary Tim Geithner disclose the real extent of this, for lack of a better word, fraudulent scam.

In simple terms think of it as an auto dealer, which knows that U.S. taxpayers will provide for an infinite amount of money to fund its ongoing sales of horrendous vehicles (think Pontiac Azteks): the company decides to sell all the cars currently in contract, to lessors at far below the amortized market value, thereby generating huge profits for these lessors, as these turn around and sell the cars at a major profit, funded exclusively by U.S. taxpayers (readers should feel free to provide more gripping allegories).

What this all means is that the statements by major banks, i.e. JPM, Citi, and BofA, regarding abnormal profitability in January and February were true, however these profits were 1) one-time in nature due to wholesale unwinds of AIG portfolios, 2) entirely at the expense of AIG, and thus taxpayers, 3) executed with Tim Geithner's (and thus the administration's) full knowledge and intent, 4) were basically a transfer of money from taxpayers to banks (in yet another form) using AIG as an intermediary.

For banks to proclaim their profitability in January and February is about as close to criminal hypocrisy as is possible. And again, the taxpayers fund this "one time profit", which causes a market rally, thus allowing the banks to promptly turn around and start selling more expensive equity (soon coming to a prospectus near you), also funded by taxpayers' money flows into the market. If the administration is truly aware of all these events (and if Zero Hedge knows about it, it is safe to say Tim Geithner also got the memo), then the potential fallout would be staggering once this information makes the light of day.
Posted by Anonymous Monetarist at 6:15 PM