That rifle hanging on the wall of the working-class flat or labourer's cottage is the symbol of democracy. It is our job to see that it stays there. 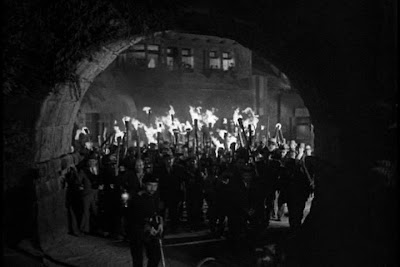 FAIRFIELD, Conn. – A busload of activists representing working- and middle-class families paid visits Saturday to the lavish homes of American International Group executives to protest the tens of millions of dollars in bonuses awarded by the struggling insurance company after it received a massive federal bailout.

About 40 protesters — outnumbered by reporters and photographers from as far away as Germany — sought to urge AIG executives who received a portion of the $165 million in bonuses to do more to help families.

"We think $165 million could be used in a more appropriate way to keep people in their homes, create more jobs and health care," said Emeline Bravo-Blackport, a gardener.

She marveled at AIG executive James Haas' colonial house, which has stunning views of a golf course and the Long Island Sound. The Fairfield house is "another part of the world" from her life in nearby Bridgeport, which flirted with bankruptcy in the 1990s and still struggles with foreclosures and unemployment."

"Lord, I wonder what it's like to live in a house that size," she said.

Another protester, Claire Jeffery, of Bloomfield, said she's on the verge of foreclosure. She works as a housekeeper; her husband, a truck driver, can't find work.

News of the bonuses last week ignited a firestorm of controversy and even death threats against AIG employees. The company, which is based in New York, has received $182.5 billion in federal aid and now is about 80 percent government-owned, while the national housing and job markets have collapsed as the country spirals into a crippling recession.

American International Group Inc. has said it was contractually obligated to give the retention bonuses, payments designed to keep valued employees from quitting, to people in its financial products unit, based in Wilton, Conn. Congress began action on a bill that would tax 90 percent of the bonuses, and the company's chief executive urged anyone who received more than $100,000 to return at least half.

AIG has argued that retention bonuses are crucial to pulling the company out of its crisis. Without the bonuses, the company says, top employees who best understand AIG's business would leave.

Besides Haas' home, protesters on Saturday also visited the Fairfield home of AIG executive Douglas Poling. They were met both times by security guards. They left letters that acknowledged some executives, including Haas and Poling, are giving up the money but that asked them to support higher taxes on families earning more than $500,000 a year.

"You have a wonderful opportunity to help your neighbors in Connecticut," the letters said. "We ask you to consider the experiences of families struggling in this economy."

Afterward, the group protested at the office of AIG's financial products division in Wilton, where they waved signs and chanted, "Money for the needy, not for the greedy!"

There were no arrests.

Mary Huguley, of Hartford, said AIG executives should share their wealth with people like her sister, who is facing foreclosure.

"You ought to share it, and God will bless you for doing it," she said.
Posted by Anonymous Monetarist at 5:27 PM