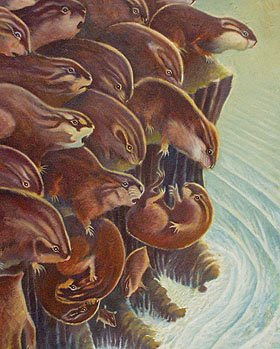 (This article summarizes what I would call my optimistic view as to what is currently transpiring ... Kabuki theatre that I have previously characterized as Barry Dunham hustling the hustlers - playing the role of the pretty german blonde in the gym. That viewpoint places faith in Big O being a pragmatic liberal intellectual and playing the hand he was dealt. The darker viewpoint though on current events would be best summarized as 'the seduction of Barry Dunham' ... I want to be hopeful, it has yet to be verified. -AM)

A new bail-out plan from the US Treasury and, once again, a divergence of opinion between equity and fixed income investors.

The equity crowd eagerly snapped at the bone thrown by Tim Geithner this week. His unveiling of the public-private investment plan (PPIP) revealed a few more details than his hazy statement in February, which had sent stocks tumbling.

But fixed income investors were less taken by Mr Geithner's latest offering, a stance that has long defined their behaviour since the credit and mortgage crisis emerged in August 2007.

The substantial rally in banking stocks has been accompanied by a far more tentative rebound in the various derivative indices for leveraged loans and subprime mortgages, which the PPIP is expected to grease.

The mechanics of the PPIP also illustrate just how broken finance has become since the onset of the crisis. Not only do some bankers expect a bonus in the bad years, private investors require a hefty lay up from the taxpayer before they take a punt and buy impaired assets.

Beyond the irony that the Treasury is relying on securitisation and leverage to resolve a banking crisis that is based on excessive borrowing and owning securitised assets, the PPIP is trying to resolve a paradox between banks and investors. There is a substantial gap between the price at which banks want to sell their loans and mortgages, and the price investors are willing to pay for them.

The PPIP is attempting to get the market for impaired mortgages and loans moving by clarifying a clearing price for these assets. The Treasury hopes that investors, bearing little risk as the taxpayer is on the hook, will close the gap between the bid and offer for these assets.

Complicating the standoff associated with setting a market price is the likelihood that banks will cherry pick their portfolios of loans and sell the bad stuff.

As one trader put it this week: "Why should a bank give hedge funds an opportunity to clean up?"

For an investor, buying lemon loans will not translate into lemonade. They also need loans with some upside to sweeten the deal.

More than 18 months into this mess, the Treasury still acts as if the problem facing markets is a lack of liquidity, not one of solvency. Since the demise of Lehman Brothers last September, fixed income investors have voted for insolvency.

Ominously, the peak in corporate and consumer bankruptcies for this current recession and ensuing torching of bank loans is likely still to be a long way in the future.

Such an outlook is not priced into the equity market, given the rally in banking stocks this month. But the fixed income market suggests a lot of these assets are nearly worthless.

This is where things could get very nasty. Here we have the taxpayer being set up to transfer funds to investors and banks; but there is no guarantee that financial institutions will play ball.

Lurking behind this is the fear that the sale of loans and mortgages at prices set under the PPIP will reveal that some institutions are insolvent.

Banks are still in a position to play for more time. Should they fail the Treasury's highly publicised stress tests, which should be completed by the end of April, banks will have another six months to try to raise private capital.

They can remain zombies throughout that period.

One big unanswered question is how tough the Federal Deposit Insurance Corporation will be with those banks and whether it will force them to sell loans and raise more capital ahead of that schedule.

For all its shortcomings, the PPIP may be an act of Kabuki theatre that moves us one step closer to knowing the full cost of Wall Street's collective failure.

That might then open the door to what has been an unpalatable prospect for regulators: the outright nationalisation of banks. In these circumstances, maybe everyone might at least agree with such an extreme outcome.
Posted by Anonymous Monetarist at 6:24 PM