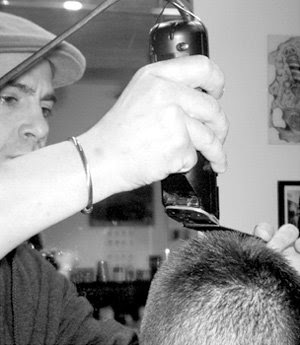 (David Rosenberg was the first Wall Street chief economist to use the D-word and mean it. Earlier in this missive Honest Abe also references neighbor Bill King. Citizen King's website link is to your right. -AM)

The redoubtable David Rosenberg of Merrill Lynch says that, by his educated reckoning, the overnight whisperers may well have been right. If you toss in the 161,000 jobs of the revised count for the previous two months, the 134,000 added last month by the delusional birth/death model and the relatively mild weather that, he calculates, added 107,000 slots -- Presto! -- you are comfortably (or perhaps uncomfortably is more accurate) past the one million mark.

The title of David's commentary, "Depression-Style Jobs Report," gives you an inkling of its thrust. He calls the reach of the decline "breathtaking," and points out that more than three of every four industries surveyed were shedding jobs.

The only sectors with "even a faint pulse," he sighs, were education and health services (and, given the pinch that hospitals are experiencing, we wonder about prospects for the latter).

David notes that in the typical garden-variety postwar recession, employment declines by two million or so. "In just five months," he reflects, "we have lost 50% more than we usually do in a classic 10-month recession."

Moreover, the job picture for March shapes up as even uglier. He cites 600,000-plus jobless claims; the Challenger's layoffs tally being up an "eye-popping" 158% from a year ago; the 78,000 plunge in temporary employment; and the record-low work week as foretelling a monster loss of 800,000 jobs this month. And he doesn't rule out a payroll shrinkage of one million.

For some time now, our favorite measure of unemployment has been U-6, which takes in everyone, including the increasingly large cadre of folks who are earnestly seeking work but have to settle for part-time jobs.

The ratio for that unenviable category at the end of last month stood at 14.8%, the highest since the BLS started to keep tabs back in 1994, and encompassed a scarcely inconsequential one in seven workers. Not the least of reasons, we infer, why one in 11 homeowners, to use David's estimate, are either delinquent on their mortgages or in foreclosure.

He confesses that "The extensive deleveraging, as the credit excess and asset bubble of the last cycle continues to unwind, is exerting a powerful negative influence on the real economy that is far beyond our collective professional or personal experience." And he exclaims that, strain as he might to find "something -- anything" positive to say about it, the February employment report was devoid of even a hint of good news.

Which has prompted David to advise caution to any of Merrill's clients tempted to believe that, with the stock market down 56% from the peak, the all-clear has been sounded. For he's firmly convinced that "the worst" has yet to be priced into this market.

David explains that we're currently in the grip of what practitioners of the dismal science refer to as a "negative-feedback loop," in which the slide in asset values takes a painfully big bite out of household net worth, consumer confidence, spending and, finally, employment. The vicious process then feeds right back into more asset and credit defaults.

Or, as he puts it, we're caught in a trap -- and, 18 months into the credit collapse, there's no sign that we have adopted the policies that might stabilize things, much less turn them around.

And while in any case he has doubts about the effectiveness of the administration's proposals to rescue housing, David makes an impassioned plea that the nation turn its focus and its energy to the seriously ailing labor market. All the more so, because he sees this final leg down in housing as being driven by mounting joblessness.
Posted by Anonymous Monetarist at 10:20 AM