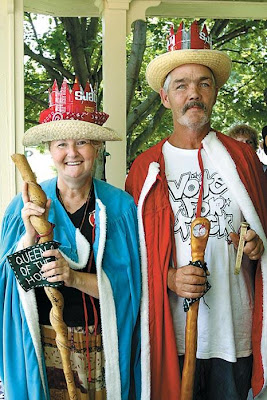 NEW CASTLE, Ind. -- Folks here figured the mile-long stretch of a hundred-plus yellow rail cars, which divides this small town like a graffiti-covered wall, would leave soon after it arrived.

That was a year ago.

Tens of thousands of boxcars are sitting idle all over the country, parked indefinitely by railroads whose freight volumes have plummeted along with the economy. And residents of the communities stuck with these newly immobile objects, like the people of New Castle, are hopping mad about it.

Before February 2008, boxcars were a fleeting sight in this hamlet of 17,500 people 50 miles east of Indianapolis. For decades, no more than one or two trains a day traveled down the sleepy short-haul line that cuts through town.

Then rail cars -- 20-foot-tall yellow behemoths covered with the sort of spray-painted artwork once associated with New York City subway cars -- started rolling in by the dozens and grinding to a halt.

Railroads, which have seen shipping volumes drop by double-digit percentages in recent months, face a particularly vexing problem. The nation's five largest railroads have put more than 30% of their boxcars -- 206,000 in all -- into storage, according to the Association of American Railroads. Placed end-to-end, the cars would stretch from New York to Salt Lake City.

The railroads simply don't have enough space in their yards to store all the idled cars. So they look for convenient, out-of-the-way places to park them -- usually dormant tracks and rail sidings that are rarely used.

Dennis Duffy, Union Pacific's executive vice president of operations, says that in a healthy economy, the railroad might have 5,000 to 8,000 cars in storage. At the moment, it has 48,000 idle cars, he says, forcing it to come up with "unconventional solutions." It has parked them on 60 sidings around the country.

Residents in New Castle complained, but were frustrated to learn that the railroad has every right to keep the cars on its tracks, according to a spokesman for the Federal Railroad Administration. "The bottom line is they're rail cars sitting on a railroad," says Mayor Jim Small. "The two sort of go together."

Spencer Wendelin, an executive with the C&NC Railroad, which owns the tracks, declined to say how much rent the railroad collects for storing the cars, or who owns them. He has little sympathy for the angry residents.

"The railroad, I'll guarantee you, was there a long time before they bought their houses," he says.
Posted by Anonymous Monetarist at 6:36 PM