Hey, I still have an oar! 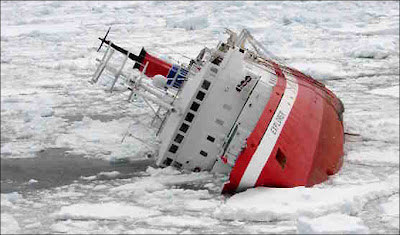 (An excellent synopsis of where we are at and why I'm waiting to buy gold & equities at considerably lower levels. All things being equal I would suggest that the Federales latest move suggests we are at the end of the beginning. Goldie says we need to spend almost 9 trillion more. Will the 10 year hit Rosenberg's target of 1.5%? Stay tuned batfans... - AM)

"US central bankers decided yesterday to purchase $300 billion of Treasury securities over the next 6 months, concentrated in the 2-10 year part of the curve, and to more than double mortgage-debt purchases to $1.45 trillion."

So this desperate move by the Fed, the final bullet so to speak, this is clearly hyperinflationary, right?

Not by a long shot.

But wait - there are other, more complicating factors at work.

Household net worth has declined by roughly 20% since peaking in 2007, according to the Fed's own figures. Household "wealth" fell by $5.1 trillion in the fourth quarter alone. Combined with rapidly increasing household savings, the Fed, by moving to artificially suppress interest rates, is inadvertently quashing the very risk appetites it desperately needs to motivate in order to kickstart its own ongoing Ponzi scheme.

Taking the Fed's Flow of Funds report at its word -- that household wealth fell by $5.1 trillion in the fourth quarter -- let's answer the question above with another question: Which has more of an impact on risk appetites, a 5% decline in, say, the value of one's home, or a 20% increase in the price of energy, food and medicine?

While it's true that certain things are going up in price -- energy, heath care, medicine, taxes -- those have a very low multiplier effect in the economy. Why is that important? Because the velocity of money is falling so rapidly (people are trying to save money because their assets are declining in price while certain necessities are rising in price), the Federal Reserve simply cannot keep up - even by using their final bullet to desperately expand credit.

Meanwhile, things with a high multiplier effect are deflating, and debt is being destroyed so rapidly, that this deflation overwhelms any price increases seen in other items.

The reason we don't get hysterical about deflation -- even when we see the price of things decline during periods of inflation -- is that high multiplier items are the ones that tend to increase the most in price.

It's therefore puzzling to me that people continue to point to the price increase of certain goods as evidence that deflation is absent... even as they see the value of their assets decline by 20%.

It's like claiming the boat isn't sinking because, "Hey, I still have an oar!"
Posted by Anonymous Monetarist at 3:17 PM