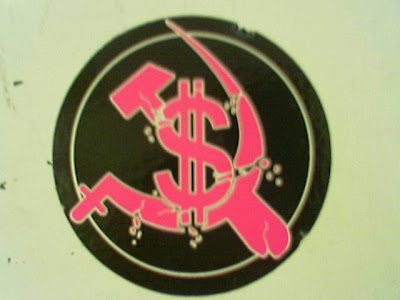 (Consider the article below [Russia says businessmen need to 'cowboy up'] and combine it with the factoids that the United States now has a bigger proportion of banking assets in state hands than the Chinese -today's LEX column- and Chinese companies now have 3 entries in the world's 20 largest earners for 2007, and I ask you: Is the world becoming a bad science fiction movie from the 70s?-AM)

He urged them to "make sacrifices" to save jobs.

"People have been getting very rich in a very short time," he said in an interview with the head of Russia's state-owned Channel One television station.

"Now it is time to return debts, moral debts, because the crisis is a test of maturity."

His remarks reflect the government's fears of a rise in unemployment as the Kremlin becomes increasingly concerned with signs of political unrest.

Reuters yesterday reported that about 1,000 demonstrators took to the streets in the far eastern town of Vladivostok calling for the Russian government to resign.

The city has been the scene of some of the sharpest protests since the economy began to nosedive in August. Mr Medvedev said businessmen should make sacrifices for the sake of their employees and keep payrolls full.

"If a man becomes a real businessman, he can appreciate his employees and will try to put off part of his ideas, some of his personal consumption to maintain his staff . . . and save the business," he said.

"But if the man starts panicking, if he sells [his] business, runs away somewhere, that means he is a bad businessman." Mr Medvedev's remarks come amid a sea-change in the Kremlin's attitude towards bailing out the country's top businesses.

The Kremlin created a $50bn £36bn fund last year to rescue ailing businesses. But the allocations have been frozen after only $11bn was distributed. Officials have said business owners should not expect any more state help.

"He who survives tough crisis conditions will be an effective businessmen, an effective manager in the best sense of the word," Mr Medvedev said. "I think this is very important."
Posted by Anonymous Monetarist at 12:20 PM