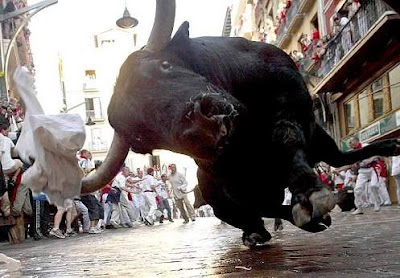 (Wow if this isn't a glowing neon sign that one needs to start thinkin' about going long equities I don't know what is. Ideally, an intermediate capitulation would have a big down day, overnight futures down sharply, and then an early morning whoosh. The Wheel of Time and Price is suggesting March 9th to March 11th might be it. Methinks it is time to adapt a Radar O'Reilly stance and 'wait for it'. -AM)

With the S&P 500 closing Monday just above 700 and the Dow Jones Industrial Average breaking below 7,000 for the first time in 12 years, stocks are now cheap, but perhaps not cheap enough.

"Given the magnitude of this crisis we may have to eventually see very cheap levels before we bottom," Deutsche Bank analysts said in a research note. "So cheap is helpful but not a reason to suggest an imminent sustainable bounce."

Major indexes were gaining ground early Tuesday, led by volatile banking stocks. The Dow was up 31 points at 6,794 and the S&P 500 was up about 4 points at 705 in recent trading. But there's plenty of skepticism that any gains are sustainable.

Even Wall Street strategists who had seen bottoms in the previous stock market drops over the past year are more hesitant this time around.

JPMorgan Chase strategist Thomas Lee isn't confident that the stock markets have reached a bottom - he told clients Tuesday he sees the S&P 500 trading sideways until it reaches a final low in the second half of the year.

"There is no doubt that equities are severely oversold, but the more glaring question is, where is the next catalyst?," he wrote. "For now, we are moving back to our 'range-bound' stance, wary of the wipeouts and bear killers seen between 1929 and 1932."

Morgan Stanley strategist Jason Todd said it is still too early for investors to bet on a recovery in the stock markets. "We have not seen enough of an improvement in fundamentals or earnings expectations to be comfortable that the market can absorb further disappointment, which we think is coming," he wrote.
Posted by Anonymous Monetarist at 10:01 AM