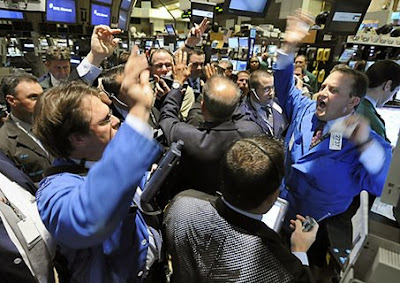 These are bad days for the cult of the equity. The bare figures say it all.

As of mid-morning yesterday in New York, after the latest terrible US jobs data, the S&P 500 index was down 64.4 per cent in real terms from a peak that it set in 2000.

So another 15 per cent fall from yesterday's opening levels would make this the second worst overall decline ever, second only to the Great Crash of the 1930s.

This may not do that much damage to the notion that stocks are the best investments for the long term. In terms of a human lifespan, nine years is not that long.

But it gets worse. When compared with bonds, Arnott points out in a forthcoming piece for the Journal of Indexes that US stocks have now underperformed Treasury bonds since 1969. Very few savers actively putting money away today started much before 1969. Most of them did so during a period when the cult of the equity held sway. For this whole generation, that belief in equities has proved badly misplaced. Various long-term surveys show that there have been very long periods of underperformance by equities in the past.

But we can say that the current sell-off is almost without precedent for its speed. Arnott's figures show that as Wall Street opened yesterday it was already dealing with the second biggest six-month decline in its history. The only bigger six-month drop was barely larger, at 51 per cent, at the end of the crash of 1932.

The good news is that 1932 marked the bottom of the great bear market of the 1930s, and that stocks rallied more than 100 per cent in a matter of weeks.

These numbers all cover the US, which has been the world's largest and most important market for a century, and which has the best data. The picture for other markets varies, but the sell-off has been historically bad virtually everywhere. Japan's situation, indeed, is a deal worse - it is at levels last seen, in nominal terms, in 1982, and its Nikkei 225 index is 82 per cent below a peak set at the end of 1989.

All of this could shatter our confidence in stocks as the vehicle for the long run. While the evidence is still unequivocal that they do perform best over the very long term, the periods may be so long that they do not help some people during their lifetimes.

Instead, stocks seem subject to very long cycles covering very different periods of history. Periods such as the 1930s and even the middle of the 18th century appear to have relevant lessons for markets today. Financial historians have a long and productive period ahead of them trying to explain these long-term market ebbs and flows. They lend themselves to grandiose historical cycles, and to political agendas.

People on the left can point out that big crashes have coincided with periods when income inequality was extreme. This appears to be true of 1929 and of the peak two years ago.

People on the right can retort that bear market troughs, and long periods of underperformance by stocks, have come when more redistributionist policies have held sway, and when unions have held more power. This might fit the 1930s or the 1970s.

Either way, stocks show a strong historical tendency to overshoot, both up and down. Where does that leave us when trying to invest now?

Long-term valuation measures suggest that stocks are now cheap, but still not quite as cheap as at previous great bear market bottoms. This suggests we are entering a good time to buy for those young enough to take a very long-term perspective - but 1932 shows that such a perspective needs to be some decades.

Playing the market at this point is more about predicting the actions of other investors than about placing a value on companies. How will investors react to this fall?

Confidence in stocks is likely to have been shaken, as the realisation takes hold that bonds have beaten stocks over four decades.

Add to this the weight of demographics. Those who started saving in 1969 were in the early years of the baby boom generation. They have only a few years left to retirement, and suddenly have far less wealth set aside for it than they had thought. That will mean saving more, and it is likely that a big chunk of that money will go to bonds rather than stocks.

Once they retire, they will have to sell many of their securities. The generation that has been let down by the cult of the equity may have little choice but to ensure, by their actions, that equities take a long time to recover.
Posted by Anonymous Monetarist at 1:30 PM