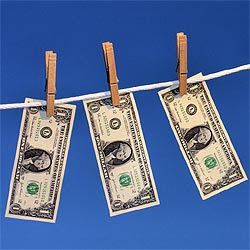 A few days ago I posted an article from the New York Post:

'Citigroup and Bank of America have been aggressively scooping up securities in the secondary market.

But the banks' purchase of so-called AAA-rated mortgage-backed securities, including some that use Alt-A and option ARM as collateral, is raising eyebrows among even the most seasoned traders. Alt-A and option ARM loans have widely been seen as the next mortgage type to see increases in defaults.

One Wall Street trader told The Post that what's been most puzzling about the purchases is how aggressive both banks have been in their buying, sometimes paying higher prices than competing bidders are willing to pay.'

My comments on this article were: Hey when the Federales bring the leveraged up buyers to the table banks gotta have something to sell at inflated prices - won't be loans valued at par that's for dang sure- so the obligatory press release can be generated to boost stocks.

Upon further review of the PPIP however, there still appeared at least to this humble blogger to be a disconnect as to why Citigroup and Bank of America were overpaying for these securities.

They don't want to sell loans or marked-to-market assets for less than what they can currently get, or at a level that will cause additional writedowns, and the private investor doesn't want to risk their principal by overpaying ... so how can PPIP work?

Well if you believe the article in the Post it's obvious that Citigroup and Bank of America believe that it will work for the assets that they are overpaying for ... so obviously they see a way to game the system, so much so, that they are willing to overpay to collect additional assets for that purpose.

And then it clicked...

What if the banks were the private investor? In the opaque world of finance this is not challenging and the Federales are not going to be disclosing the identities of the investors.

This would be the equivalent of spinning straw into gold for the banks. For a nickle you can double the market value of a toxic/legacy asset you hold, or reap a quarter for each newly acquired asset you launder from the secondary markets.

Methinks that the Federales laundromat may soon be open for business. Pretty clever Timmy.
Posted by Anonymous Monetarist at 5:10 PM