Johnny Nostradamus has no mustard seeds 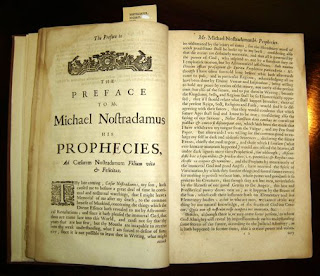 Feb. 5 (Bloomberg) -- Let’s say you own a $1 million home in Santa Barbara, California.

The house seemed like a steal when you bought it with that adjustable-rate mortgage in 2005. You still love the white beaches and those yachts bobbing up and down in the harbor.

Then you awaken early one morning, troubled that your monthly payments will soon double. You go out to pick up your newspaper and see for-sale signs on five houses on the street. One identical to yours just sold for $500,000.

Are you going to pay the bank $1 million plus interest for your place? John R. Talbott, a former investment banker for Goldman Sachs, poses that hypothetical question in his latest book of financial prophesy, “Contagion.”

His answer: “I don’t think so,” he says. “If I’m right, then this housing decline has only just begun.”

Talbott is an oracle with a track record: His previous books predicted the collapse of both the housing bubble and the tech-stock binge before it. A friend who runs a New York steak house introduces him as Johnny Nostradamus, he says.

What sets him apart from other doomsayers is his relentless emphasis on simple arithmetic. He walks you through the numbers to show how U.S. house prices got so out of kilter with wages, rental prices and replacement values -- the cost of buying a property and building a home. (“Homes in California by 2006 were selling at three to five times what it would cost to build a similar home from scratch,” he writes.)

Talbott’s latest predictions are sobering. The U.S. is only halfway through the total potential decline in housing prices, he says. Home values will continue to deteriorate for four to five years, he forecasts. Adjustable-rate mortgages issued in 2004 and 2005, for example, are only now resetting for the first time, he notes.

Bankers may “try to blame the crisis on poor Americans with bad credit histories, but that is not the real cause of the housing crisis,” he says. “The greatest home-price appreciations and the homes most subject to price readjustment are in America’s wealthiest cities and its glitziest neighborhoods.”

At the end of 2008, a record 19 million U.S. homes stood empty and homeownership sank to an eight-year low as banks seized homes faster than they could sell them, the U.S. Census Bureau said this week. Almost one in six owners with mortgages owed more than their homes were worth, Zillow.com said the same day.

By the time the crash ends, Talbott predicts, homeowners will have lost as much as $10 trillion, with investors and banks worldwide losing almost $2 trillion. And just as the U.S. starts getting over a prolonged recession, the first big wave of baby boomers will retire, depriving the economy of their productivity (and high consumption), he says.

Living in smaller houses with their savings gutted, U.S. baby boomers will face yet another big challenge, Talbott says:

“The toughest job to get in the future will be the elderly person greeting you as you enter the local Wal-Mart.”
Posted by Anonymous Monetarist at 3:40 PM