Will this trigger Deleveraging 2.0? 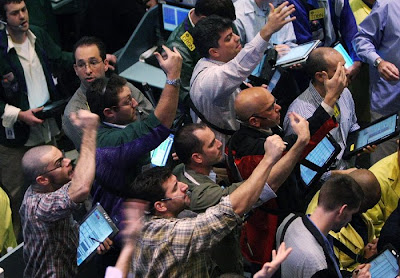 Brokerage firms are reducing financing and other services to hundreds of hedge funds, in a move that could accelerate the shakeout among these heavy-hitting investors.

Under financial pressure, securities firms are dividing their hedge-fund clients into lists of those they consider best able to weather the financial turmoil and those they're less sure of. The result is that more funds may have to merge, find other financing at higher cost or close.

Being on banks' less-favored lists doesn't necessarily mean a death knell for hedge funds -- private investment partnerships that cater to institutions and the rich and have wide discretion in their strategies. Plenty of such funds could continue, especially smaller ones that don't rely heavily on Wall Street. Funds also could get off the lists if their returns rebound or they get cash infusions from investors. But since many hedge funds make heavy use of borrowed money, or leverage, reduced financing can crimp performance.

Funds on Wall Street banks' A-lists receive, besides financing, perks such as stock research, trading data and introductions to executives of companies in which they might invest. Among funds on the A-lists are such stalwarts as Moore Capital Management, Tudor Investment Corp. and SAC Capital Advisors.

But Wall Street banks have put 200 or more other funds on what might be called B-lists: funds seen as either too risky -- because they could fold -- or not profitable enough to the banks.

The moves reflect a sharp reversal. For years, banks competed hotly to draw hedge funds to their "prime brokerages," which handle securities trading and lend clients money. Now prime brokers are in retrenchment as their parent banks reel from losses and take care not to take undue risk in lending out their cash.

The shakeout could lead to continued instability in the financial markets in the near term as troubled funds sell assets. Longer term, fewer hedge funds could mean lower financial-market volatility, since the funds tend to be such rapid traders.
Posted by Anonymous Monetarist at 11:45 AM