Sailing very close to the wind 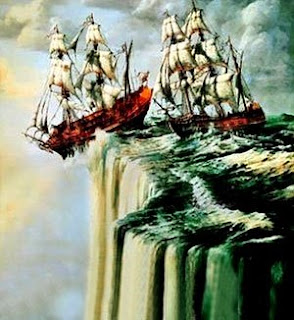 (Today's LEX column suggests that even given all the 'green matter' funneled into the AIG blackholio they still might not make it or as LEX states : they will start 'sailing very close to the wind'. Goodness if such a thing were to occur the Federales would have to admit that they screwed up big time unless of course dere be criminality d'ahr, but since there isn't a criminal investigation going on that wouldn't be a .... waitaminnit...- AM)

American International Group Inc.’s financial products unit, which brought the firm to the verge of collapse with bad bets on credit-default swaps, is being investigated by U.K. prosecutors for possible criminal conduct.

Investigators are working with authorities in the U.S. who are conducting separate reviews, Britain’s Serious Fraud Office in London said today in a statement. AIG said it is cooperating with the probe, which isn’t related to insurance operations.

“We will use our full range of powers to seek information and to speak to those with an inside knowledge of the company’s operations,” said Richard Alderman, director of the SFO, in the statement. “It is right for us to look into the UK operations of AIG Financial Products Corp., to determine if there has been criminal conduct.”

It was a “surprise” for the SFO to disclose the probe so early in the investigation, said David Corker, a lawyer at Corker Binning in London who isn’t involved in the case. Usually the agency doesn’t make announcements until after conducting searches, he said.

SFO spokesman Sam Jaffa said that U.K. investigators have been discussing starting an investigation with the U.S. “for some time.” In the next two to three weeks they plan to meet with U.S. investigators and executives at the company, he said.
Posted by Anonymous Monetarist at 12:17 PM