I'd buy that for a nickel 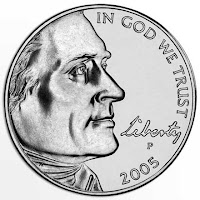 (Do my eyes deceive me? Can it be? How in the name of the naysaying nabobs of nancy capitalism did this article get by the editorial staff of the Wall Shill Journal? All the ink and tsuris spilled over our financial debacle and they dare print the solution?

Sacré bleu! You mean the taxpayer pool is not the greater fool? Are you suggesting that banksters can either be bold and hold or sell like hell? That the buyers are lower and the sellers are higher? To imply, no to dare to suggest, that there is a clearing price for the cancer, that you can calculate it, that folks are doing just that, is sacrilegious to the concept of the ensembled masses holding up their little beige books and beseeching Chairman Ben to guide them to the land of socialized milk and honey .

The bray of pigs howling over Timmy G not providing the magic restorative elixir is equally matched by folks cooking up Swedish meatballs and warning of bad sushi ... how can the solution be as simple as the free flippin' markets?

Toxic assets aren't difficult to sell if the price is right.
(Reeeeally? Do tell... - AM)

Hedge funds and private-equity firms are buying bonds based on risky home loans at prices as low as five cents on the dollar as banks, insurance companies and pension funds are forced to unload these securities that continue to lose value.(They are worth a nickel? Similar to the Lone Star purchase price when you drill down past the 22 cent narrative? Hoocoodanode?- AM)

This is happening at a time when the government is still trying to work out how best to value these assets and entice investors to buy mortgage assets that are clogging up banks' books.(Send this article to every representative and senator in the land darlin', yo I got your 'asset valuation' right 'ere - AM)

Meantime, investors with an appetite for risk are swooping in to help those desperate to find buyers for unwanted debt. "The forced selling of residential mortgage-backed securities and the lack of willing buyers is creating opportunity in this sector," said Pete Nolan, principal at Smith Breeden Associates in Durham, N.C.(Methinks there is no lack of willing buyers when the price is right. I mean, hey, I'm sure a lot of folks would like to sell Cisco at $50. - AM)

For bonds with higher ratings, such as double-A, buyers are typically willing to pay up to 20 cents on the dollar -- some even as high as 40 cents -- because they believe it is still a good buy based on their valuation of these bonds, which continue to face a flurry of downgrades.(By George I think she's got it. - AM)

"The bonds could be worth 10 cents or 20 cents and both sell for 15 cents on the dollar, so it spells an opportunity for someone who can decipher the difference or who can properly value bonds on a fundamental basis," Mr. Nolan said.

To get an estimate of the intrinsic value of these bonds, they may use their own models or brokers, or hire people they believe are familiar with the underlying collateral.(What? What is this you say? They aren't impossible to value? The toxic assets clogging the plumbing of finance can be plunged by a spreadsheet and opposable thumbs attached to a frontal lobe? Heresy!- AM)

Steve Persky of Dalton Investments, a hedge fund based in Los Angeles, says he recruited analysts from Countrywide Financial last summer and raised $350 million to buy distressed residential mortgage-backed securities. Countrywide was bought by Bank of America Corp. after its subprime-lending business collapsed.

"These bonds have all the hallmarks of a distressed opportunity," Mr. Persky said.

THE FOLLOWING WAS DELETED FROM THE PRINT EDITION:

Borrower behavior, how aggressive a given mortgage servicer is in pushing for foreclosure, and other factors are considered when valuing these assets. Legislation also plays a role. In mortgage cramdown, where a judge can change the rules governing a mortgage is passed, it could affect the performance and value of these bonds.

The risk factors associated with the bonds are similar to those when a loan is underwritten, so it is a complicated process with many different variables like creditworthiness of the borrower and the documentation available.

(Great day in the morning! I wonder why this was deleted from the print version? Don't you? Is it because it runs clearly into the face of the howling that all of these citizen-friendly issues can't be quantified and negates the pablum narrative that such 'concessions' would create uncertainty and make the assets too difficult to value and dissuade investors and prolong the downturn and blah blah blah.- AM)
Posted by Anonymous Monetarist at 10:13 AM