(Wisegeek.com: When the guillotine was first introduced, some condemned criminals would pay executioners to sharpen the blade, ensuring a quick and relatively merciful end. Prisoners sentenced to beheading in certain eras in England would also pay their executioners, requesting execution in a single blow. In both of these senses, the payment was more like a bribe than a specific fee for services rendered, as it were. -AM) 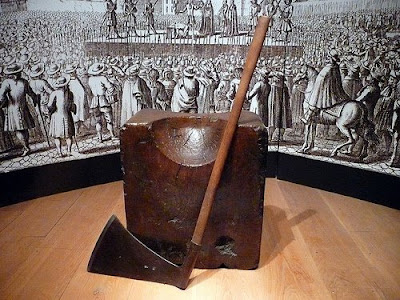 Even in the best of times, carrying a balance on your credit card is a risky -- and costly -- proposition. These days, it can be downright foolish, at least if there's a chance you might miss a payment or two.

Millions of cardholders have recently received letters from the likes of Citibank, Bank of America Corp., Wells Fargo & Co. and American Express Co. notifying them that their interest rates are going up, in some cases to 30% if a single payment is missed.

JPMorgan Chase & Co., the nation's largest issuer of plastic, has begun charging hundreds of thousands of cardholders a $10 monthly fee for having carried large balances for more than a couple years.

Why? In part it's because default rates are rising and banks are dealing with additional risk. But lawmakers and consumer advocates say the higher rates also reflect banks' massive losses from betting wrong on the housing boom, and they're basically sticking credit card customers with the tab.

At the same time, rising layoffs and tough economic conditions have caused many people to lean more heavily on their plastic -- sometimes too heavily.

Corona resident Louis Martinez, 39, is carrying about $45,000 in debt on eight credit cards. He says it's not that he's been deliberately reckless. Rather, the debt piled up after his wife got sick several years ago and half the family's income disappeared.

"What can you do?" Martinez asked. "You still want to provide for your family."

He said he grows more anxious with each bank letter that arrives warning him of potential interest-rate increases.

"I've never missed a payment," Martinez said. "But with the way things are now, I wonder every day how I'm going to get through the month."

By ratcheting up the pressure on customers, major banks -- some of which have received billions of dollars in bailout cash from taxpayers -- are making it likely that a growing percentage will be forced to either default on their obligations or seek bankruptcy protection.

Last week, letters arrived at the homes of Citibank cardholders throughout California warning that their rates could rise to 29.99% if they miss a single payment -- even for cards with low-low-low introductory rates.

Citi customers have the right to decline any such rate hike. But if they do, their account will be closed as soon as the card expires. And that's one of the more generous conditions offered by a leading bank.

Other lenders say cardholders who don't want higher rates can close their accounts immediately and pay off the outstanding balance.

Samuel Wang, a Citi spokesman, blamed the rate hike on the "difficult market environment" and "severe funding dislocation." In other words, business has gone down the tubes.

"In light of these unprecedented developments and others, Citi is repricing a group of customers in our Citi-branded consumer credit card business in the U.S. to appropriately manage these risks," Wang said. "We are carrying out this repricing in order to continue lending in this environment."

American Express cited a similar rationale to explain why it had raised interest rates by up to 3 percentage points for millions of cardholders last month.

"It was because of the challenging environment that we're in and the cost of doing business," said Desiree Fish, a company spokeswoman.

A Chase spokeswoman declined to comment on the company's new $10 fee, saying only that "we make changes to pricing, terms or credit lines based on borrower risk, market conditions, and the costs to us of making loans."
Posted by Anonymous Monetarist at 11:12 AM