Immelt in your hands Daddy Guv 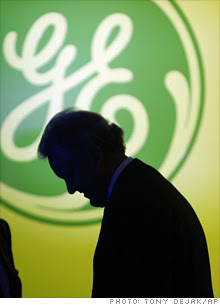 The US economy is suffering its steepest downturn since at least the 1970s and could descend into a depression, Jeff Immelt, General Electric's chief executive, warned yesterday.

He said businesses and consumers alike were struggling to contend with tumultuous markets and a financial services industry under siege.

When asked whether he would call the current slowdown a recession or a depression, Mr Immelt joked that he would need to refer to his college economics textbook for a precise answer but said "it is one of those" two.

He contended that governments were "firing as many bullets" as they could to stimulate economic growth and stabilise the credit markets. Those measures, he said, should begin to take hold by early next year.

"Governments are all in," he said. "And in my view, government always wins."(Hopefully it ain't a Pyrrhic victory. - AM)
Posted by Anonymous Monetarist at 10:14 AM