This D-word thing is gettin' around... 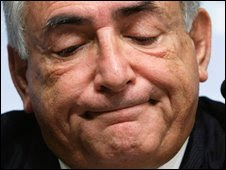 Advanced economies are already in a "depression" and the financial crisis may deepen unless the banking system is fixed, International Monetary Fund Managing Director Dominique Strauss-Kahn said.

“The worst cannot be ruled out,” Strauss-Kahn said in Kuala Lumpur, where he was attending a gathering of central bankers from Southeast Asia. “There’s a lot of downside risk.”

Ten days ago, the IMF cut its world-growth estimate for this year to 0.5 percent, the weakest pace since World War II. Stimulus packages alone won’t succeed in dragging the global economy out of recession unless confidence is restored in the banking system, Strauss-Kahn said today.

“All this will work if, and only if, the different countries are likely to do what they have to do in terms of restructuring the banking sector,” he said. “And today it’s not done.”

The U.S. economy has lost 3.57 million jobs since a recession started in December 2007, its biggest employment slump of any economic contraction in the postwar period as companies from Macy’s Inc. to Caterpillar Inc. cut costs. The U.K. economy will shrink this year by the most since 1946, the IMF forecasts.

“We’re probably not very far from the point where the question of interest rates is not the most important question,” Strauss-Kahn said. “Providing direct liquidity to the market, restructuring the banking sector, may have more influence on demand than interest rates.”

Asian nations will need a recovery in the global economy before the region can exit a slowdown, the IMF said this month. Strauss-Kahn said today the fund’s forecast for a recovery to start in 2010 is “very uncertain.”
Posted by Anonymous Monetarist at 11:51 AM