Now is not the time to eat alone. 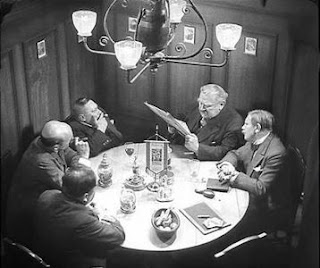 Wall Street's Double Secret Emergency Meeting: "Charlie Gasparino reports that hours after the Congressional bitch sesh yesterday, a top secret meeting entitled "The Goldman Sachs Roundtable" was held at 85 Broad. And if you're thinking this was a clubhouse meeting run by a couple of first years, how wrong you are. According to Chaz, this was not organized by some "low level schlubs," but Goldman's Milton Berlinski, and run by co-presidents Gary Cohn and Jon Winkelried. On the agenda? "Solving this problem because the government isn't going to."

The task-force apparently included "top 20 hedge fund and private equity executives," and while we've got nothing but love for Ken Griffin, I want to hear the Big Guy* was there or it doesn't count. While we wait on confirmation, a few more details. Griffin reportedly made some "fascinating comments," including the bold call to get at the root of the cause, the mortgages themselves; the prevailing sentiment was that while it's better to wait for a good plan, as opposed to "a quick and dirty bad one," time is of the essence; there's no confidence in Geithner; they want more Volcker; and the representative from Bain Capital made off like a bandit, stuffing free fruit and cookies in his purse, when he thought no one was watching.

(Goldie has come out with a statement - AM)

Contrary to a report on CNBC earlier today, Goldman Sachs did not host "a secret, emergency meeting" to discuss the Treasury Department's Financial Stability Plan on Tuesday. Three weeks ago, we issued a invitation to a large group of our investing clients to discuss market conditions, including a presentation on the macro-economic environment. The fact that the dinner took place on the same day as the Treasury Department's announcement was a coincidence.
Posted by Anonymous Monetarist at 12:45 PM