Would you like to play a game? - with Chinese characteristics 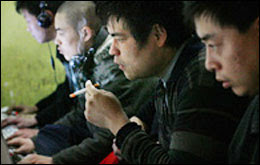 Chinese government and freelance hackers are the primary culprits behind as many as several hundred daily attacks against U.S. government, electric-utility and financial computer networks, a senior congressman said.

“Sophisticated hackers could really wreak havoc on our financial systems if they were successful,” House Homeland Security Committee Chairman Bennie Thompson said in an interview. The threat is “primarily from China.”

Many of these problems will be detailed in a 60-day review the Obama administration on Feb. 9 said it would conduct on government cybersecurity efforts, Thompson said. President Barack Obama also has said he would appoint a computer-security chief who will report directly to him, a move Thompson supports.

Currency trading is among the financial networks targeted by hackers, Thompson said. An attack would be particularly damaging in light of the financial system’s troubled state, he said.

“We were provided alarming data on the vulnerability of our electrical grid in this country,” he said.

“There’s nothing that I’ve been briefed on in a classified setting that gives me any concern that what the vice president said is true,” he said. “It’s easy to say something is going to happen, so if it happens two years from now, you say, ‘I told you so.’”
Posted by Anonymous Monetarist at 2:55 PM