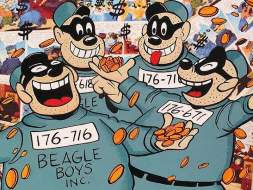 From The Times
February 6, 2009
Times Online

Banks dependent on taxpayer support are planning to rush out hundreds of millions of pounds in bonuses to senior bankers and traders before a threatened crackdown.

As ministers prepared to curb excessive remuneration, it emerged that Barclays and Lloyds Banking Group were poised to follow Royal Bank of Scotland (RBS) by paying bonuses within weeks.

Lloyds, which has taken £17 billion in rescue money from the Government, appears ready to give hundreds of millions of pounds to top executives and more junior staff.

Barclays, which has tapped the Bank of England for billions of pounds in loans and guarantees, is believed to be planning even larger payouts. According to the terms of its purchase of the North American division of the collapsed Lehman Brothers, Barclays is due to pay $2.5 billion (£1.7 billion) in bonuses to traders and dealmakers on Wall Street in the next few days.

Ministers reacted angrily to reports in The Times that RBS was preparing to give bonuses to thousands of senior bankers and traders. Banks applying for government insurance to underwrite toxic assets and free up cash for lending are likely to have to meet conditions preventing them paying excessive remuneration, officials said.

Lord Mandelson, the Business Secretary, warned RBS that it risked alienating ordinary people if it gave its traders and bosses “exorbitant” bonuses.
Posted by Anonymous Monetarist at 12:06 PM