All aboard the insolvency bus 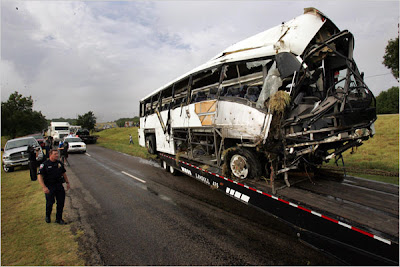 ('Tis amazing how the discourse in the MSM is changing. We are all bloggers now.-AM)

Some of the large banks in the United States, according to economists and other finance experts, are like dead men walking.

A sober assessment of the growing mountain of losses from bad bets, measured in today's marketplace, would overwhelm the value of the banks' assets, they say. The banks, in their view, are insolvent. (Paging Dr. Taleb, Dr. Roubini, Dr. Faber. -AM)

None of the experts' research focuses on individual banks, and there are certainly exceptions among the 50 largest banks in the country. Nor do consumers and businesses need to fret about their deposits, which are insured by the U.S. government. And even banks that might technically be insolvent can continue operating for a long time, and could recover their financial health when the economy improves.

But without a cure for the problem of bad assets, the credit crisis that is dragging down the economy will linger, as banks cannot resume the ample lending needed to restart the wheels of commerce. The answer, say the economists and experts, is a larger, more direct government role than in the Treasury Department's plan outlined this week.

The Treasury program leans heavily on a sketchy public-private investment fund to buy up the troubled mortgage-backed securities held by the banks. Instead, the experts say, the government needs to plunge in, weed out the weakest banks, pour capital into the surviving banks and sell off the bad assets.

It is the basic blueprint that has proved successful, they say, in resolving major financial crises in recent years. Such forceful action was belatedly adopted by the Japanese government from 2001 to 2003, by the Swedish government in 1992 and by Washington in 1987 to 1989 to overcome the savings and loan crisis.

"The historical record shows that you have to do it eventually," said Adam Posen, a senior fellow at the Peterson Institute for International Economics. "Putting it off only brings more troubles and higher costs in the long run."

Of course, the Obama administration's stimulus plan could help to spur economic recovery in a timely manner and the value of the banks' assets could begin to rise.

Absent that, the prescription would not be easy or cheap. Estimates of the capital injection needed in the United States range to $1 trillion and beyond. By contrast, the commitment of taxpayer money is the $350 billion remaining in the financial bailout approved by Congress last fall.

Nouriel Roubini, (There he is! Gosh MOD(Master of Disaster) is getting more press than Lindsay Lohan. - AM)a professor of economics at the Stern School of Business at New York University, has been both pessimistic and prescient about the gathering credit problems. In a new report, Roubini estimates that total losses on loans by American financial firms and the fall in the market value of the assets they hold will reach $3.6 trillion, up from his previous estimate of $2 trillion.

Of the total, he calculates that American banks face half that risk, or $1.8 trillion, with the rest borne by other financial institutions in the United States and abroad.

For its part, the banking industry bridles at such broad-brush analysis. The industry defines solvency bank by bank, and uses the value of a bank's assets as they are carried on its books rather than the market prices calculated by economists.

"Our analysis shows that the banks have varying degrees of solvency and does not reveal that any institution is insolvent," said Scott Talbott, senior vice president of government affairs at the Financial Services Roundtable, a trade group whose members include the largest banks.(What, us worry? - AM)

Edward Yingling, president of the American Bankers Association, called claims of technical insolvency "speculation by people who have no specific knowledge of bank assets." (Mr. YingYang could YOU please be more specific?- AM)

Roubini's numbers may be the highest, but many others share his rising sense of alarm. Simon Johnson, a former chief economist at the International Monetary Fund, estimates that the United States banks have a capital shortage of $500 billion. "In a more severe recession, it will take $1 trillion or so to properly capitalize the banks," said Johnson, an economist at the Massachusetts Institute of Technology.

At the end of January, the IMF raised its estimate of the potential losses from loans and other credit securities originated in the United States to $2.2 trillion, up from $1.4 trillion last October. Over the next two years, the IMF estimated, United States and European banks would need at least $500 billion in new capital, a figure more conservative than those of many economists.

Still, these numbers are all based on estimates of the value of complex mortgage-backed securities in a very uncertain economy. "At this moment, the liabilities they have far exceed their assets," said Posen of the Peterson institute. "They are insolvent." (All aboard the insolvency bus. -AM)
Posted by Anonymous Monetarist at 10:18 AM