Another Swedish model for us to complain about... 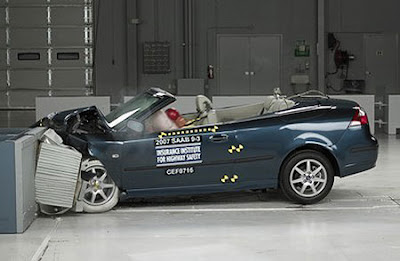 blog.niot.net: Vägverket, the Swedish Road Administration, is reporting that General Motors used ten human cadavers for crash research. While it isn't clear which GM vehicle hosted the corpses on their one-way trip into a wall, a spokesman for Vägverket said it was most likely the Saab brand. The spokesman was also quick to point out that all of the cadavers were people "who had donated their own bodies."

Check one item off our GM bailout checklist: With no rescue from Sweden, Saab Automobile AB filed for bankruptcy on Friday. As General Motors Corp. lobbied for more money from Washington, it presented a massive restructuring plan that severed its ties with the unit.

In a statement, Saab said the Swedish court process is to reorganize Saab into a fully independent business, aiming to bring resources back to Sweden. It also has three new models ready to be launched over the next year and a half. And as it turns out, the Swedish government could still provide loan guarantees to Saab following a restructuring, a senior official told Reuters.

Of the restructuring, Saab managing director Jan Ake Jonsson said, "We explored and will continue to explore all available options for funding and/or selling Saab and it was determined a formal reorganization would be the best way to create a truly independent entity that is ready for investment."

As noted by a Bloomberg article, Sweden has ruled out taking over Saab, saying taxpayers' money shouldn't be pumped into a company that's been unprofitable for 19 of the last 20 years. Saab is seeking funds from both public and private sources.
Posted by Anonymous Monetarist at 9:40 AM