It's called eating your own cookin' 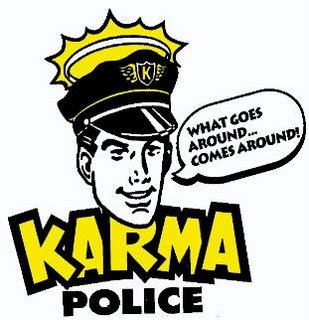 (Looks like the Karmic Cookin' Hour over at the weekend WSJ. -AM)

Inside Citigroup, bank executives are growing increasingly exasperated with what they view as the Obama administration's failure to state even more explicitly that nationalization isn't imminent and that "stress tests" announced as part of the latest financial-rescue package aren't a guise for government takeovers that likely would make their common shares worthless. The tests, expected to begin next week, will be required for any bank with more than $100 billion in deposits. Government takeovers likely would make common shares of those banks worthless.

"They've got to make a statement against nationalization," said one person familiar with Citigroup's thinking. The Obama administration's rhetoric so far amounts to "destructive ambiguity," this person said.

('Destructive ambiguity' is a pretty darn good description of the collective balance sheets of 21st century banksters. -AM)

The jobless rate is hanging high -- for many of the roughly 3,000 political appointees who served President George W. Bush. Finding work has proved a far tougher task than those appointees expected.

"This is not a great time for anyone to be job hunting, including numerous former political appointees," said Carlos M. Gutierrez, Mr. Bush's commerce secretary.

Mr. Gutierrez is keeping busy during his job hunt...he hopes to run a company again because "I have a lot of energy."

(Oh my stars and garters. Nuff said! Thanks for the laugh WSJ. -AM)
Posted by Anonymous Monetarist at 12:27 PM