Jeremy Siegel is a witless hack 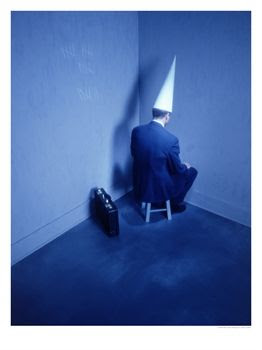 (I am submitting this article from the Wall Shill Journal by Jeremy Siegel as an inductee into the Anonymous Monetarist All-Time Hall of Shame. It is an embarrassment and a joke. I feel sorry for any poor cretin that would use such utter nonsense as a basis by which to invest in equities. After the article an obvious comment. -AM)

Standard & Poor's recently shocked investors with an announcement that reported earnings for its S&P 500 Index for the fourth quarter of 2008 are forecast to be negative for the first time since such data were calculated in 1936. S&P further reports that for all of 2008, earnings are expected to be less than $40 per share, indicating that the market now has a price/earnings ratio over 20, well above its historical average of 15.

What this dismal news actually reflects is the bizarre way in which S&P (and most other index providers) calculate "aggregate" earnings and P/E ratios for their indexes. Unlike their calculation of returns, S&P adds together, dollar for dollar, the large losses of a few firms to the profits of healthy firms without any regard to the market weight of the firm in the S&P 500. If they instead weight each firm's earnings by its relative market weight, identical to how they calculate returns on the S&P 500, the earnings picture becomes far brighter.

Yet when S&P calculates earnings, these market weights are ignored. If, for example, Exxon-Mobil earned $10 billion while Jones Apparel lost $10 billion, S&P would simply add these earnings together to compute the aggregate earnings of its index, ignoring the vast discrepancy in the relative weights on these firms. Although the average investor holds 1,381 times as much stock in Exxon-Mobil as in Jones Apparel, S&P would say that that portfolio has no earnings and hence an "infinite" P/E ratio. These incorrect calculations are producing an extraordinarily low reported level of earnings, high P/E ratios, and the reported fourth-quarter "loss."

As the fourth-quarter earnings season draws to a close, there are an estimated 80 companies in the S&P 500 with 2008 losses totaling about $240 billion. Under S&P's methodology, these firms are subtracting more than $27 per share from index earnings although they represent only 6.4% of weight in the index. S&P's unweighted methodology produces a dismal estimate of $39.73 for aggregate earnings last year.

If one applies market weights to each firm's earnings using the same procedure that S&P employs to compute returns, the results yield a more accurate view of the current profit picture. Market weights produce a reported earnings estimate of $71.10 for 2008 -- nearly 80% higher than the unweighted procedure. The reason for this stark difference is that the firms with huge losses generally have extremely low market values and hence have a much smaller impact on the total earnings in the index.

Similarly, operating earnings (essentially, earnings before write-offs), of the S&P 500 are boosted to $81.94 per share when earnings are weighted by market value, yielding a P/E ratio of about 9.4 for the market, instead of S&P's $61.80, which yields a P/E ratio of 12.5 when firm profits are simply added. Even the negative earnings for the fourth quarter disappear when market weights are accounted for, as fourth-quarter GAAP earnings on the S&P 500 Index total $7.44 per share and operating earnings reach $14.40.

No one can deny that the recent economic downturn has badly hurt corporate earnings. But let's not fool ourselves into thinking that this is an expensive market. When computed accurately, P/E ratios show that this market is much cheaper than is currently being reported by the S&P. Those who venture into today's stock market are indeed buying good values.

(I could not believe this tripe as I read it. It took all of a few seconds of rubbing a couple of brain cells together to generate the obvious retort. The methodology of computing S&P earnings is only valuable in the context of the constancy of such methodology over a long duration. Taking a snapshot utilizing a different method tells you nothing lest you perform that calculation over the long-term and then compare your snapshot with historical results using the same methodology. In other words using a new methodology to come up with a PE of 20 needs to be understood within the context of using that same methodology to come up with PEs at say historical troughs...

Clearly Jeremy Siegel is a witless hack. He should be ashamed of himself as should the WSJ. Stay away from anything this fella associates himself with. In closing, check out this entry on WIKI:

Jeremy Siegel was famously bullish in 2000 just as the stock market was collapsing. In a BusinessWeek interview in May 2000 when asked whether valuation measures indicated the stock market was overvalued he replied: {Have we learned anything over the past 50 years? When we compare a 100 years' PE's, we're going through the Great Depression, a banking collapse, and all the rest. Have we learned how to prevent a banking collapse? A Great Depression? I would say, yes, we've had incredible success. Have we been in the longest economic expansion in history? I would say yes. Are earnings of the top companies growing at the fastest rate that they ever have, far faster than the peaks that you mentioned in the past? Yes."}

Mr. Siegel you are officially in the Hall of Shame. He is a professor of finance at the University of Pennsylvania's Wharton School - absolutely flippin'incredible!-AM)
Posted by Anonymous Monetarist at 11:53 AM

He also works for Saul Steinberg's kid, Jon at Wisdom Tree. Not suprisingly, Siegel's analysis might lead one to invest in Wisdom Tree's funds. Jon is a pump and dumper from way back who has used Daddy's $'s to make a name for himself, but, as of this writing, has never made a dime for anybody.

Just to complete the circle, guess what the name of the building is that houses the Wharton school and its professors ... Steinberg-Deitrich Hall. Guess where the Steinberg comes from?

FROM THE UNIVERSITY:
Saul Steinberg, CEO of the Reliance Group Holdings and University graduate, trustee and donor of the facility.

FROM WIDSOMTREE:
WisdomTree has assembled an impressive team including former hedge fund manager Michael Steinhardt and Wharton finance professor Jeremy Siegel, who are both among its directors.