Losses? We don't have no steeenkin' losses ... 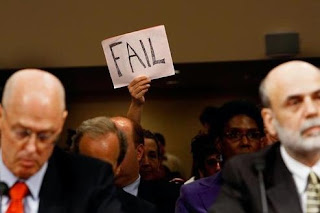 U.S. taxpayers may be stuck with losses on $30 billion of Bear Stearns Cos. assets owned by the Federal Reserve even though the central bank has said otherwise, according to Robert A. Eisenbeis, Cumberland Associates Inc.’s chief monetary economist.

“There is no prospect for a profit on the assets,” Eisenbeis wrote in a report yesterday. “Losses are mounting.”

Last week’s total was $4.22 billion, as shown in the chart. JPMorgan Chase & Co. is responsible for the first $1.15 billion under terms of an agreement completed in June, when the company took over Bear Stearns. The Fed picks up the rest.

“The transaction was not structured with adequate over- collateralization to protect the taxpayers from losses,” based on the risks associated with housing-related assets at the time, Eisenbeis wrote.

The central bank’s Board of Governors wrote in a Dec. 29 report to Congress that it didn’t expect “any net loss to the Federal Reserve or taxpayers” from the Bear Stearns holdings.
Posted by Anonymous Monetarist at 3:00 PM