(Both Geithner and Schumer are out suggesting that the Bair's bad bank argument is losing traction. It is still to early to say as to whether or not the banksters should 'Fear the Black French Man' - if he does the right thing- or if they will end up playing 'Hail to Chief Nancy'. The suggestion box at 1600 Penn is no doubt overflowing and respecting that Obama Smartypants probably does read newspapers ... he most certainly is aware that the prevailing view is that the banks are insolvent -Hoocoodanode?- and either Barry D parcels out some tough love or its' tough luck for us. When Timmy said that he was gonna get aggressive the other day, banks rallied ... let's hope those were the suckers at the table. Equities are the first loss tranche, we need to realize that axiom and take the elevator down so we can finally get back to movin' on up. - AM) 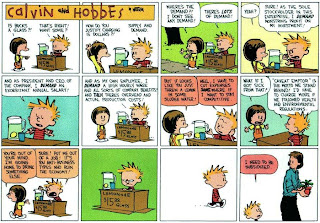 
Until recently, it appeared that the best way to support the banking system was simply to recapitalise one by one those institutions that had suffered large losses. That approach can work – but only if the losses can be clearly identified.

Thus the troubled asset relief programme in the US was based on the assumption that most losses would arise from securities based on residential mortgages. However, the recession now under way has invalidated this assumption. Huge additional losses are appearing from other sources, including credit card and automotive loans. The common factor across all these markets is that suddenly creditworthiness becomes much more difficult to assess.

Until US house prices started falling, mortgage lenders thought they could reasonably predict default rates on the basis of a few variables such as income and employment. The market for residential mortgage-backed securities (RMBS) started to break down when the old models no longer worked. The phenomenon is spreading because the current economic environment is unprecedented. It becomes impossible to predict the probability of debt defaults on the basis of past standards.

This generalised uncertainty is why credit markets have broken down. Economists call it the “lemon problem”. Buyers cannot know the quality of a used car as well as the dealer does. So they assume that when a dealer is keen to sell a particular car, it is likely to be a “lemon”(What is killin' folks right now is that they can't even sell that which is AAA, cause first no one believes it and second if they valued it at C level the waters would come crashing through the levy - AM) – it might look OK but will have some hidden defect. That means the market for used cars might not work unless participants could find some way to remedy the informational asymmetry – for example, via independent evaluators or dealers’ willingness to put their reputations at stake.(Valuation firms to do just that are the new growth industry on Wall Street ... there are a couple dozen gearing up for this service ... I kid you not. - AM)

Investors similarly assume now that a bank trying to offload parts of its credit portfolio is selling the worst risk (even if the true motive is the need to deleverage). They cannot verify this assumption quickly because, in general, those who granted the credit have the upper hand in information about the creditworthiness of their borrowers. Moreover, the judgment of rating agencies has become worthless and most banks have little reputation left to lose. There is no price that will clear the market as long as such uncertainty about value persists.

Hedge funds and other “bottom feeders” will buy distressed assets only at prices that are probably well below true value (if held to maturity) because they know that they cannot avoid the lemon problem.

Hence the need for public intervention in the form of a “bad bank”, which takes over assets that do not have a market. The “lemon” analogy suggests that a bad bank should be big. If one buys just some cars, the dealer will push the worst; but if one takes the entire lot, one is sure to pay for average quality. (The problem is that it would have to be too big for the folks comin' out of the waking dream to swallow .. two to four trillion - AM)

This implies it is futile to hope for price discovery through the reverse auctions foreseen for Tarp. Instead, the mechanism should be mandatory: all financial institutions should be forced to surrender all assets in certain categories to the “bad bank”. The government would determine pricing on a mixture of market prices, models and other valuation approaches. Banks with insufficient capital once their troubled assets had been transferred would have to be closed or recapitalised – but the healthy ones could start a new life with a clean balance sheet and thus resume normal lending.

How large would the bad bank have to be? The lemon problem has spread from RMBS to include basically all credit to US households, which totals about $14,000bn (€10,830bn, £9,800bn). The government, through its agencies, already holds the bulk of mortgages. Of the remainder, a large part has been securitised, giving rise to about $3,000bn-$4,000bn in debt that, though difficult to value, would probably still require the government to invest $2,000bn-$3,000bn. That is equivalent to 15-20 per cent of gross domestic product – comparable with the cost of previous large-scale property and banking crises.

In Europe the cost should be much lower, but the essential point remains that of taking all potentially toxic assets from balance sheets. Partial, voluntary schemes as proposed in Germany will not work.

The choice facing the US and Europe is between muddling through with partial recapitalisation schemes that leave banks alive but too weak to lend, and a Big Bang approach that clears balance sheets and allows the survivors to resume lending without looking back.( There is another option: Mr. Dunham takes the no-money down approach and forces the clearing price of cancer ... taxpayers could then match up with pirate equity and assorted vultures to ring-fence and pick up the scrum crumbs.- AM)
Posted by Anonymous Monetarist at 9:49 AM