Federales Kabuki Theatre with laundromat in back 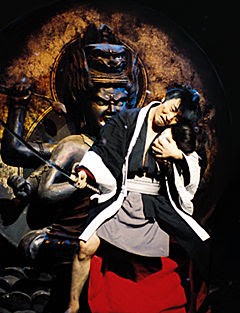 (I am not holding out hope that this editorial in the WSJ is an April Fools' joke, however much I wish it was. It appears much to my dismay that the Pretty Pathetic Investment Program (PPIP) is a complete and utter joke. It would seem as if it is nothing more than a bankster laundromat, as I've previously suggested ... wash, rinse and repeat. The most egregious and duplicitous giveaway to the banksters heretofore wrapped in the pablum narrative of price discovery. I'm gobsmacked that this program comes from uber liberal Barry and is rightfully being outed by the WSJ right-wingers. If Madoff dies soon, bury him in a parka for hell has truly frozen over. The audacity of having hope ... indeed, it is beginning to look like Act 1 of this theater should be entitled 'the Seduction of Barry Dunham.'-AM)

The Obama Administration insists it wants to "partner" with private investors for its new toxic-asset purchase plan. But the more details that emerge, the more it seems Treasury wants to work with only a select few companies. This is no way to conduct a bank clean-up.

The investment community was already suspicious last week when Secretary Timothy Geithner unveiled his plan, announcing that Treasury would select four or five companies as "fund managers" to purchase toxic securities. Given that the whole idea is to create a liquid market for these assets, we'd have thought Treasury would encourage as many players as possible.

But the bigger shock was when Treasury released its application to become a fund manager, a main rule of which is that only firms that already have a minimum of $10 billion in toxic securities under management can apply. Few hedge funds, private equity players or sovereign wealth funds come near this number. The hurdle would bar many who specialize in the very distressed assets that the Obama Administration is trying to offload from banks.

Hedge Fund Intelligence recently estimated total assets under management at Avenue Capital Group at $16.4 billion, King Street Capital at $15.8 billion, Fortress Investment Group at $13.7 billion, and Elliott Associates at $12.8 billion. Presumably, the portion of these portfolios devoted to toxic assets is significantly smaller. "It's difficult to imagine why most firms would even bother to apply now," one hedge fund manager told us.

Treasury rules also say the $10 billion limit must be comprised of commercial and residential mortgage-backed securities that are "secured directly by the actual mortgage loans, leases or other assets and not other securities." This is another way of saying that they must be "first tier" assets, for instance collateralized debt obligations (CDOs). But what many private players instead deal in are "CDOs squared" or CDOs secured by other CDOs, which would not count toward the requirement. This, too, will make it harder to take part in the program.

While dozens of banks and insurance companies today hold more than $10 billion in toxic securities, the vast majority are trying to get these assets off their books -- not lining up to buy more. As for asset management firms that hold such a big portfolio -- and are also healthy enough to serve as fund managers -- there is only a small pool, such as Black Rock, Pimco, Goldman Sachs or Legg Mason, as well as a titan or two of the hedge fund industry, such as Bridgewater.

"This is ugly," says Joshua Rosner, the managing director of Graham, Fisher & Co., an independent research firm. "As long as they are experienced, there is no rational reason for creating limitations on who becomes a bidder and manager of assets. It doesn't serve the public good, though it may serve those few large firms that appear to have a privileged relationship with Treasury."

We have no idea if Treasury is playing favorites, but it certainly doesn't look good. All the more so given that some of these big players may have consulted informally with the Obama Administration as it was writing the plan. Not to mention that the big asset management companies that are most likely to land plum fund-management jobs are also the ones that have been most vocally praising the Treasury plan. (Treasury declined to comment.)

None of this bodes well for the bank rescue. The purpose is to create new buyers for these toxic securities, a process that, in Treasury's own words, will lead to better "price discovery." The best way to accomplish that is with highly competitive bidding that includes any player with a solid track record in handling distressed assets. The weaker asset-holding banks are already wary of selling into this program, worried that low bids will result in big losses that will further hurt their balance sheets. They will be even less likely to take part if only a handful of managers, who have every incentive to keep prices low, are doing the bidding.

There is also the worry that Treasury is creating a new set of problems by concentrating these sold-off toxic securities into funds run by few entities. If this program is a roaring success, Treasury is guaranteeing that a select group of hand-picked firms are set to reap enormous profits, via a program that was largely underwritten by taxpayers. As it is, smaller players can now only take part in this program if they agree to "buy" into the funds run by one of the exclusive managers. So not only is the government going to be anointing a favored few to invest in these assets. It is also giving those favored few the opportunity to collect fees and profit-sharing from anyone else that wants to go in with them. In the wake of the AIG bonfire, Mr. Geithner is tempting another outcry.

Investors were happy that Treasury finally settled on a strategy last week, but no one should underestimate the enormous challenges the government still faces in making this work. Given the outrage over the lack of transparency that has existed in the federal bailouts to date, the last thing Treasury needs is to be seen as running a program that will benefit a select few. The government needs all the help it can get, and that means lowering the barriers to entry, not raising them.

(Damn dirty apes. -AM)
Posted by Anonymous Monetarist at 10:03 AM