Some brains are more equal then others 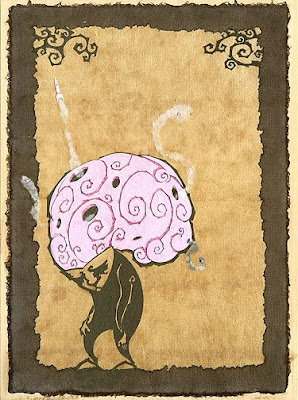 (If this is actually true and Honda is insisting it is not an April Fools Joke, before I leave this mortal coil I expect to see a truly hilarious Japanese game show based on this tech.-AM)

Car boots that pop up when a user thinks "open" came a step closer to reality yesterday after Honda showed off technology for using human thoughts to control machines.

The Japanese carmaker ran a video of a man imagining four simple movements - raising his right hand, raising his left hand, running and eating - that were then duplicated by Asimo, the company's humanoid robot.

The company insisted the video was not an April Fool.

Although the idea is a staple of science fiction, Honda's announcement is another sign of the growing commercial interest in brainmachine interfaces. Companies are implanting electrodes in the brains of paralysed patients to help them communicate. Others are trying to commercialise non-invasive devices for use as video game controllers.

Honda claims to have achieved the world's highest level of accuracy for a brain-machine interface that does not require surgery. It said it had done this using a rubber cap lined with electrodes to measure small changes in blood flow as well as electrical activity in the brain.

"In order to realise the dream to transmit human intelligence to machines we are trying to develop a technology to control a robot by human thought alone," said Yasuhisa Arai, director of the Honda Research Institute Japan.

Other future applications that Honda has suggested include air conditioning that comes on when you feel hot, car navigation that recommends restaurants when you are hungry, and even direct brain-to-brain communication, although the company said this was still at the stage of basic research.

Honda said it had achieved 100 per cent accuracy with its best test subject, but only 90 per cent overall.
Posted by Anonymous Monetarist at 10:24 AM