Look who's coming to dinner... 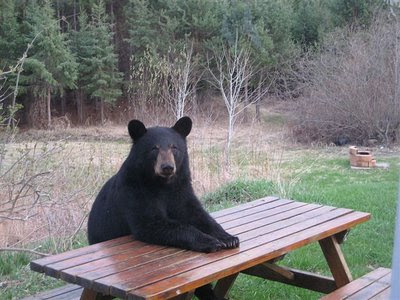 We see a very uncertain future, geopolitically, financially, economically. Yes, Oct/02 was a bottom few believed would hold but as we now know, about half of the growth in profits, output and employment was derived from the now defunct super-duper credit cycle. It was a massive leveraged boom. We realize that we have this huge rally on our hands that has definitely gone on longer than we had expected. Perhaps the market was more oversold at the lows and thus had further to “melt up” as the shorts run for cover; looking at how the early cyclicals are flying, there also seems to be a rotation under way based on the emerging view that the recession is about to end (that is a premature assessment, in our view). But we just can’t for the life of us see where the engines of sustainable growth in GDP and profits are going to come from with inventory-to-sales ratios still near cycle-highs in the business sector; the fact that we are still stuck with over 12 months’ supply of unsold new housing inventory with home prices deflating now at an accelerating rate; jobless claims at 27-year highs; the savings rate still in low single-digit terrain. At some point this rally, to be sustained, is going to have to be rooted in something more than just improving from technically oversold levels. And as for the view that the market was way oversold at the March 9th lows having collapsed 57% from the peak, keep in mind that reported earnings plunged an even greater 82%. So the view that this market is somehow attractively priced, that has only been the case all along based on consensus forecast earnings.

In fact, what was critical last Friday was the data-point on real personal income less government transfers – it fell 0.8% in February, which was the third decline in a row, and remember that this is why the fiscal stimulus is not enough to call the end of the recession. Organic personal income in real terms has to start to turn higher; in other words, the economy has to show that it has enough vitality to stand on its own two feet without the help of Uncle Sam. If you go back to the second quarter of 2008 when the federal government mailed out a record volume of tax rebates that boosted real disposable income at a whopping 10.7% annual rate, the comparable for what goes into the recession call – real organic income ex-government handouts – contracted at a 2.4% annual rate.

GDP estimates coming down across the globe

You can’t seasonally adjust away the pricing

Well, the one thing you cannot just seasonally adjust away is … the pricing! The Case Shiller home price index for the 20 largest US cities fell by 2.8% M/M in January to -19% Y/Y and -26.5% at a 3-month annualized rate. This was slightly worse than consensus and a record decline. Deflation intensified across all markets, bringing the total decline to -29.1% versus the peak in July 2006. Over the month, price declines ranged from -1.2% M/M in Charlotte (-8.2% Y/Y) to - 5.5% M/M in Phoenix (-35% Y/Y). From the peak, prices are now down 29% (and down to a six-year low) … and counting. While some data suggest that demand may be stabilizing or improving, the price never fibs and the continued decline signals that three years into this detonating residential real estate market, there remain more sellers than potential buyers. Full stop.

The hardest hit markets continue to be those where sub-prime lending was pervasive and foreclosure rates have surged. Such areas include San Francisco, Phoenix, Las Vegas, Miami, and Los Angeles – all off by 40-50% from their respective peaks. The National Association of Realtors reported that 45% of existing sales in January were foreclosure-related – such properties, selling at steep discounts, continue to drive prices lower. Looking ahead, depressed demand, tight credit, rising default rates and excess inventories can be expected to continue to lead prices lower. We estimate that an additional 10%-15% in downside is still in store.

How many times can the market rally on the same news?

What about the eye popping 1.8% rebound in total factory orders. The durables came out on March 25th and basically foreshadowed the report (and triggered a 1% rally in the S&P 500 that day too – amazing how you can rally twice on the same piece of news … yet everyone seemed to have ignored the sharp downward revisions to the back data … shhhhhh). But what nobody seemed to have noticed was that order backlogs fell 1.4% and are down now for five months running. Could it be, pray tell, that orders are actually being ... cancelled? Shipments dipped 0.1%, which is an improvement from a ‘second-derivative’ standpoint (i.e. less negative) but still down for 7 months in a row. We have data back to 1958 and we’ve never seen a losing streak like that before. In fact, the bounce in February durable goods orders is far less impressive when you consider that it is being calculated off an ever-declining January figure – January orders were first reported as being down 5.2%; then it got revised to down 7.3%; and now it is estimated at -7.8%. The actual level of durable goods orders in February was 4-1/2% lower than what we had thought it was going to be just a few weeks ago.

So what has bottomed exactly?

Not employment. Not organic real personal income. Not industrial production. Not shipments or order backlogs. Not home prices. Maybe housing starts – but February was the third lowest number on record (583k) so can we really say for sure? The NAHB index (9), but again, it is still at the third lowest level on record. Besides, this is a diffusion index – it ain’t going negative. Home sales? Well, again, at 337k in February they ticked up – but to their second lowest level ever. Is that a definitive bottom? Consumer confidence – yet again, at 26 last month, it was the second lowest on record. The ISM has certainly carved out a low – we do not doubt that. Again, it is a diffusion index, so at 36.3 it is saying that the contraction in industrial activity is not accelerating … but it is ongoing. And please note that the lowest we got in the tech wreck – the month after 9-11, in fact – was 40.8. And the stock market didn’t bottom for another year. So to think a 36.3 print on ISM signals anything but continued recession is pie-in-the-sky, in our view. Embedded in the survey result, as an aside, was the fact that for the second month in a row, not one industry – nada – posted any growth at all in March. And in the special question, we learned that barely over 30% of respondents believed that the fiscal stimulus was going to benefit their company.
Posted by Anonymous Monetarist at 2:03 PM