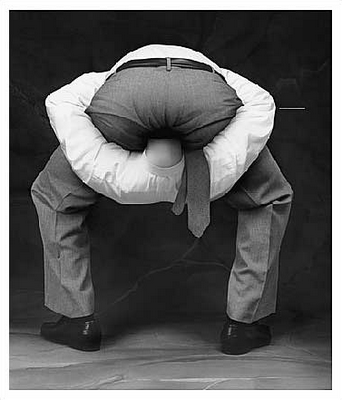 (A lot of chatter about 'inflation targeting' in the blogosphere. Please review this post from a couple months ago and realize that the Federales have been inflation targeting for well over a decade. Today's WSJ reports a lively debate between Kohn and Volckner where Volckner harrumphed that by setting 2% as an inflation objective, the Fed is "telling people in a generation they're going to be losing half their purchasing power". Yes Paul.... And?

One of these days Mr. V will be lumbering down a hall and he'll go into a room where the Federales are having a meeting that he wasn't invited to and his hair will enter a state of permanent fire. That'll be a fun article to read. -AM)

Support is building within the Federal Reserve for a move to establish a de facto inflation target in order to shore up inflation expectations and reduce the risk of deflation.

A growing number of top Fed officials, including longtime sceptics, are coming round to the idea that an explicit numerical inflation objective would be a valuable bulwark against a shift towards expectations of price declines.

Stating an inflation objective would take the US central bank closer to central banks such as the Bank of England and the European Central Bank that have formal targets.

Minutes from the December Fed policy meeting, released yesterday, say officials discussed providing "a more explicit indication of their views on what longer-run inflation rate would best promote their goals".

The minutes say: "Added clarity in that regard might help forestall the development of expectations that inflation would decline below desired levels and hence keep real rates low and support aggregate demand."

Senior Fed officials believe the subject will need to be debated further as a priority in the weeks and months ahead.

(This will undoubtedly be presented as a new initiative. To suggest anything to the contrary would imply that the Federales have been deceitful with previous policy announcements. Why if folks actually confessed that our leaders have tried to inflate their way out of the business cycle for years then blame for our current situation might be appropriately apportioned by the slavish MSM. -AM)

Former Fed governor Laurence H. Meyer, in a 2003 talk at the Federal Reserve Bank of St. Louis, described a telltale exchange on the subject of how to define[price/financial] stability. The scene was Meyer's first FOMC meeting, in July 1996, and governor Janet Yellen was making the case for inflation targeting; she said she would aim for 2%. Greenspan replied that the Federal Reserve had a mandate to foster stable prices, not rising ones. To which Yellen rejoined that the Fed also had a mandate to promote full employment. To hear her tell it, a small positive rate of currency depreciation is a necessary lubricant for economic growth (not so, according to a survey of 133 economists over 50 years, produced in 2002 by Stanley Fischer et al.)

"Janet then seized the initiative", Meyer related,"asking the chairman how he would define price stability. Greenspan tried to get away with his vague definition; 'Price stability is the state in which expected changes in the general price level do not effectively alter business or household decisions.' But Yellen pressed him and asked him if he could put a number on that. Remarkably, the chairman agreed, and said he preferred zero inflation, correctly measured. Janet asked him if he could settle for 2% incorrectly measured."

During a go-around on the topic, only a few Committee members preferred a target of zero, and the consensus was very strong for a 2% target. The chairman ended up summarizing the discussions 'an agreement for 2%' but he cautioned members not to reveal that such a discussion took place.
Posted by Anonymous Monetarist at 3:47 PM