Leverage is a dirty business 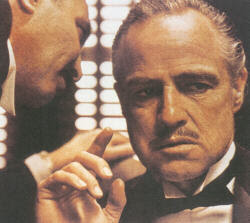 LEWIS
Bene. Don Paulson. I need a man who has powerful friends. I need many billions of dollars in cash. I need, Don Paulson, those regulators that you carry in your pocket, like so many nickels and dimes.

VITO PAULSON
What is the interests for us?

LEWIS
You name the percent. In the first year, your end should be many millions of dollars. And then it would go up.

VITO PAULSON : And what is the interest for your shareholders?

(then to DON PAULSON)

I'll take care of the shareholders, outta my share.

So we receive a percentage for finance -- political influence, and legal protection, that's what your telling me?

Why do you come to us? Why do we deserve this generosity?

If you consider many millions of dollars in cash just finance, te salute, Don Paulson.

VITO PAULSON (gets up to pour LEWIS another drink)

I said that I would see you because, I heard that you're a serious man, to be treated with respect.

But uh, I must say "no" to you -- and I'll give you my reasons. It's true, I have a lot of friends in politics, but they wouldn't be friendly very long if they knew my business was leverage instead of regulating, which they rule that as a -- harmless vice. But leverage is a dirty business.

It -- makes -- it doesn't make any difference to me what a man does for a living, understand. But your business is ah -- a little dangerous.

If you're worried about security for your billions, the taxpayer's will guarantee it.

Aw, you're telling me that our shareholders's will guarantee our investment?

[LEWIS and BEN look at each other, realizing TIMMY's faux pas].

My apologies of course, I meant no disrepect.

Very well. Here is my offer which you shall not refuse ...

Henry Paulson, who was Treasury secretary last December, may have threatened to remove the management and directors of the Charlotte, North Carolina-based bank if they didn’t comply, Cuomo wrote in a letter to Congress that was released today. Lewis also was told not to disclose his opposition to the Merrill deal because of “staggering” deterioration at the brokerage, or the regulator’s action, according to Cuomo.

Lewis and the board of the biggest U.S. bank by assets are under fire for not telling shareholders that New York-based Merrill’s fourth-quarter loss was spiraling toward $15.8 billion before they voted to approve the deal in December. Shareholders cast ballots April 29 on whether to re-elect directors including Lewis and split his roles as chairman and CEO. Some investors are calling for the 62-year-old Lewis, CEO since 2001, to resign.

Paulson kept the Securities and Exchange Commission, which is responsible for making sure companies disclose material information to their investors, in the dark, according to Cuomo.

“Questions of Bank of America’s disclosures were left up to Bank of America,” Paulson said in a statement e-mailed to Bloomberg by Michele Davis, of the Brunswick Group, a corporate communications company.
Posted by Anonymous Monetarist at 5:44 PM