Some banksters are more equal than others 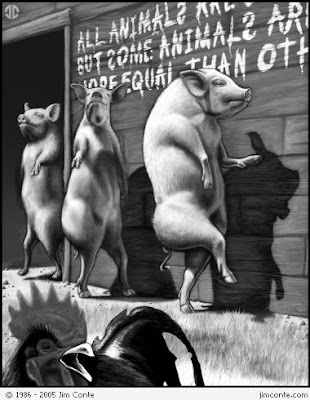 As Barry and Larry and Benny pontificate that things can only get better we are reminded that things have in fact been worse. After all its' only been 54 years since consumer prices showed an annual decline and a paltry 64 years since industrial production collapsed as fast.

However, don't panic, green shoots abound ... especially in the worse case scenario of the stress tests that the Federales have been threatening to share with us (end of April ... no...no...make that 'early' May):Per Bloomberg, the baseline forecast projected a 2 percent economic contraction and an 8.4 percent jobless rate in 2009, followed by 2.1 percent growth and 8.8 percent unemployment in 2010; an “alternative more adverse” scenario had a 3.3 percent contraction in 2009, accompanied by 8.9 percent unemployment, followed by 0.5 percent growth and 10.3 percent jobless in 2010.

Pay no mind that the Federales protest that they aren't all completed yet even though Goldie says they did theirs' in 4 days.

Focus rather on what Richard Fisher president of the Dallas Fed said on April 8th: 'The U.S. economy probably shrank in the just-ended first quarter of 2009 at a rate similar to the 6.3 percent annual decline posted in the fourth quarter of 2008...
Posted by Anonymous Monetarist at 5:47 PM