The truths you hold to be most dear are lies told to you by liars : credit-default swaps were the problem before they weren't the problem 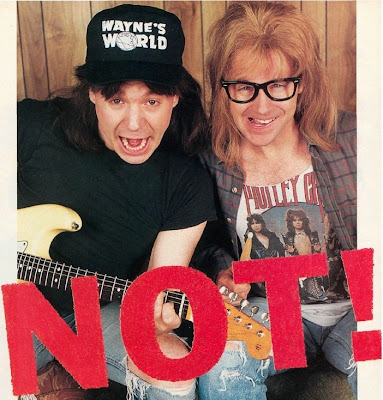 'Did you ever see that "Twilight Zone" where the guy signed a contract and they cut out his tongue and put it in a jar and it wouldn't die, it just grew and pulsated and gave birth to baby tongues?' -Garth Alger

TARP Inspector General Neil Barofsky keeps committing flagrant acts of political transparency, which if nothing else ought to inform the debate going forward over financial reform. In his latest bombshell, the IG discloses that the New York Federal Reserve did not believe that AIG's credit-default swap (CDS) counterparties posed a systemic financial risk.

For the last year, the entire Beltway theory of the financial panic has been based on the claim that the "opaque," unregulated CDS market had forced the Fed to take over AIG and pay off its counterparties, lest the system collapse. Yet we now learn from Mr. Barofsky that saving the counterparties was not the reason for the bailout.

In the fall of 2008 the New York Fed drove a baby-soft bargain with AIG's credit-default-swap counterparties. The Fed's taxpayer-funded vehicle, Maiden Lane III, bought out the counterparties' mortgage-backed securities at 100 cents on the dollar, effectively canceling out the CDS contracts. This was miles above what those assets could have fetched in the market at that time, if they could have been sold at all.

The New York Fed president at the time was none other than Timothy Geithner, the current Treasury Secretary, and Mr. Geithner now tells Mr. Barofsky that in deciding to make the counterparties whole, "the financial condition of the counterparties was not a relevant factor."

In April we noted in these columns that Goldman Sachs, a major AIG counterparty, would certainly have suffered from an AIG failure. And in his latest report, Mr. Barofsky comes to the same conclusion. But if Mr. Geithner now says the AIG bailout wasn't driven by a need to rescue CDS counterparties, then what was the point? Why pay Goldman and even foreign banks like Societe Generale billions of tax dollars to make them whole?

Both Treasury and the Fed say they think it would have been inappropriate for the government to muscle counterparties to accept haircuts, though the New York Fed tried to persuade them to accept less than par. Regulators say that having taxpayers buy out the counterparties improved AIG's liquidity position, but why was it important to keep AIG liquid if not to protect some class of creditors?

Yesterday, Mr. Geithner introduced a new explanation, which is that AIG might not have been able to pay claims to its insurance policy holders: "AIG was providing a range of insurance products to households across the country. And if AIG had defaulted, you would have seen a downgrade leading to the liquidation and failure of a set of insurance contracts that touched Americans across this country and, of course, savers around the world."

Yet, if there is one thing that all observers seemed to agree on last year, it was that AIG's money to pay policyholders was segregated and safe inside the regulated insurance subsidiaries. If the real systemic danger was the condition of these highly regulated subsidiaries—where there was no CDS trading—then the Beltway narrative implodes.

Interestingly, in Treasury's official response to the Barofsky report, Assistant Secretary Herbert Allison explains why the department acted to prevent an AIG bankruptcy. He mentions the "global scope of AIG, its importance to the American retirement system, and its presence in the commercial paper and other financial markets." He does not mention CDS.

'Well, you know what you can do with your show? You can take a flying...
[a passing jet liner mutes out most of what he says]
...till the handle breaks off and you have to get a doctor to pull it out again!' -Garth Alger
Posted by Anonymous Monetarist at 9:55 AM