The Oracle at Eccles : At Rally's End or the new Fickle-Down Economy? Though we walk through the Valley of Debt we fear 'No Easing'. 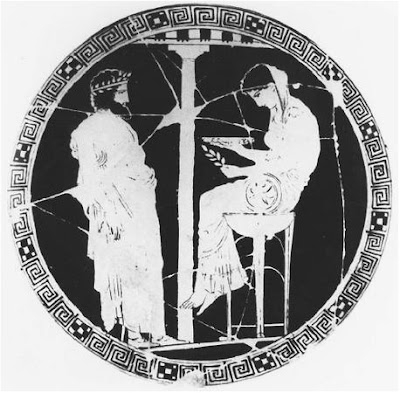 Like the Oracle at Delphi, you have to know how and what to ask. You have to ask the right question, at the right time, in the right way. The answers are sometimes inscrutable. The answers may be misleading. You may also regret having learned the answer. -Phillip Nelson

I can tell you with some assurance that, based on current Fed assumptions, no such implementation (of an exit strategy) is near at hand. And no decision has been made about either timing of the exit or the sequence in which the various tightening tools — raising interest on reserves, selling assets, doing reverse repos — will be deployed. - Steven K. Beckner, Fed supplicant

'I prefer to see policy reacting to apparent exuberance in asset markets and the problematic risk exposure this could create, rather than initiating action out of a strong conviction that these particular assets are overvalued.' -Charles Evans, High Priest

After the November FOMC meeting all bets on language change are off.

The language could be altered as early at the last FOMC meeting of the year on Dec. 15-16. Most economists, at the moment, have penciled in a wording change early next year and a rate hike sometime after June.

Lou Crandall, chief economist at Wrightson ICAP, said Fed watchers would be wise to circle a speech that Bernanke is scheduled to make to the Economic Club of New York on Nov. 16.

"It is not inconceivable that the FOMC might start to fiddle with the adjectives in its statement as soon as the December FOMC meeting."

(The great washed huddle around the Oracle at Eccles to discern what is being prophesied. How will the Sword be taken to the Gordian Naught? Don't need a sword to cut through flowers oh no, oh no. -AM)
Posted by Anonymous Monetarist at 1:18 PM