They are killin' Sam, I know it was you Timmy. You broke my heart. 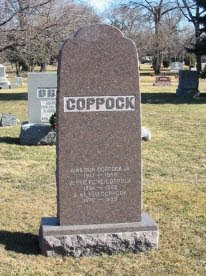 Coppock was an economist who had been asked by the Episcopal Church to identify buying opportunities for long-term investors. He thought market downturns were like bereavements and required a period of mourning. He asked the church bishops how long that normally took for people, their answer was 11 to 14 months and so he used those periods in his calculation.

A buy signal is generated when the indicator is below zero and turns upwards from a trough. No sell signals are generated (that not being its design). The indicator is trend-following, and based on averages, so by its nature it doesn't pick a market bottom, but rather shows when a rally has become established.

The daily Coppock Curve still has a bullish bias for all 24 S&P industry groups.

Most of the Elliott Wave comments that we see totally ignore the fact that the 10-21-11/02 decline was a five-wave pattern.As such, that decline cannot be counted as either a fourth wave or a “B” wave.

Furthermore, since the S&P followed that decline with a rally to new recovery highs, we have little choice but to label the decline as the “C” wave of a larger ABC correction. Indeed, the bigger question has to do with where that ABC pattern began. The two best choices are the highs on September 23 or October 19; we prefer the former.

Why is that important? There are two reasons. First, not only did the rally from the November 2 low achieve new ytd highs, its structure is corrective. Second, that 9/23-11/2 ABC pattern has established a key double-bottom at 1029-1020.

The significance of that double bottom is that, if it is violated, it would lock in the post-July rally as a complete pattern (in the same way that June’s initial weakness reversed the rally from March’s low).

The corrective structure of the 11/2-11/11 rally means that we need to respect the possibility that it was a diagonal triangle. (We say “was” because Thursday’s sell-off locked in that rally as a complete pattern.) Diagonals are ending patterns so, if that “diagonal” count is correct, then the index could be on the verge of its largest correction since at least the July low. In prior posts, we have mentioned the intermediate negatives that bolster this correction possibility, so it seems clear that the post-July uptrend is skating on thin ice.

That said, the index could benefit from the fact that the daily Coppock Curve has the potential to remain constructive for another 6-8 trading days. Thus, the door is nominally still open for a challenge of 1121-1156. At the least this condition (plus an oversold 10-day CBOE put/call ratio) should provide an initial cushion.