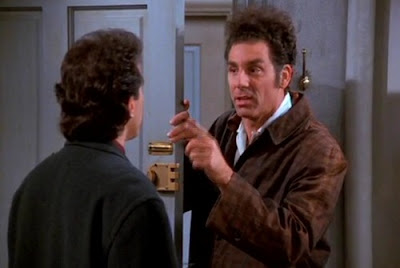 Jerry: Ah, you're crazy.
Cosmo Kramer: Am I? Or am I so sane that you just blew your mind?
Jerry: It's impossible.
Cosmo Kramer: Is it? Or is it so possible that your head is spinning like a top?
Jerry: It can't be.
Cosmo Kramer: Can't it? Or is your entire world just crashing down all around you?
Jerry: All right, that's enough.
-Seinfeld

Unlike a well-defined, precise game like Russian roulette, ... multiplying and dividing by six, one does not observe the barrel of reality. -Nassim Taleb

On October 31, Kiev newspaper editors got dozens of calls about light planes doing aerosol spraying during the day. In refuting the claims, the district's Emergency Response office said "no permission had been granted for small aviation aircraft to fly within the city limits." Yet eye-witness accounts from Lviv, Ternopil, and other Ukraine cities said the same thing.
-Baltimore Chronicle

(666 years ago , according to the narrative of Gabriele de’ Mussi the medieval Black Death apparently got its start at the Black Sea Port of Kaffa, a Crimean trading post.. an area now located in modern day Ukraine. -AM)


A deadly plague could sweep across Europe, doctors fear, after an outbreak of a virus in Ukraine plunged the country and its neighbours into a state of panic.

A cocktail of three flu viruses are reported to have mutated into a single pneumonic plague, which it is believed may be far more dangerous than swine flu. The death toll has reached 189 and more than 1 million people have been infected, most of them in the nine regions of Western Ukraine.

President of Ukraine Viktor Yushchenko has called in the World Health Organisation and a team of nine specialists are carrying out tests in Kiev and Lviv to identify the virus. Samples have been sent to London for analysis.

President Yushchenko said: “People are dying. The epidemic is killing doctors. This is absolutely inconceivable in the 21st Century.”

In a TV interview, the President added: “Unlike similar epidemics in other countries, three causes of serious viral infections came together simultaneously in Ukraine – two seasonal flus and the Californian flu

“Virologists conclude that this combination of infections may produce an even more aggressive new virus as a result of mutation.”

Prime Minister Yulia Tymoshenko: “We have sent the analyses to Kiev. We don’t believe it’s H1N1 swine flu. Neither do we know what kind of pneumonia it is.”

A spokesman for the World Health Organisation said: “We do not have a time scale for the results of the tests in London, although some preliminary results have been obtained. I cannot tell you what they are.We did not have enough of the virus samples so we will have to grow some more before we can come to a conclusive decision about its nature.”

Neighbouring Poland has called on the EU to take action, fearing the mystery virus may spread westwards.

Prime Minister Donald Tusk has written to European Commission President Jose Manuel Barroso and the Swedish Prime Minister, Fredrik Reinfeldt, who holds the EU presidency, saying: “The character of this threat demands that rapid action be undertaken at the European Union level.”

A doctor in Western Ukraine who did not want to be named, said:” We have carried out post mortems on two victims and found their lungs are as black as charcoal.

“They look like they have been burned. It’s terrifying."
Posted by Anonymous Monetarist at 2:27 PM