After the locusts comes the famine 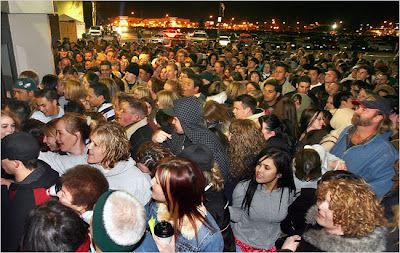 Do you remember the first of December?

In 2008, Black Friday sales measured by ShopperTrak rose 3 percent compared to the prior year's Black Friday.

TNS Retail Forward senior economist(December 5, 2008): "The good news is that shoppers are not further tightening their spending plans."

(December 7, 2008) :More than 172 million shoppers throughout the United States visited stores or Web sites during Black Friday weekend, according to the National Retail Federation in Washington, D.C. That represented a 17.7 percent increase compared with 2007. "There was a lot of demand out there, and there were discounts that people couldn't pass up," said Federation spokesman Scott Krugman.

(December 7, 2008) :Richard Giss, a retail analyst with the Los Angeles office of Deloitte LLP,said most retailers probably will be satisfied to match their 2007 sales figures or maybe record a slight year-to-year increase.

If quantum theory is correct there exists a reality where Bubblevision focuses on the fact that this year's reporting is eerily similar to 2008 Black Friday's commentary and that since there is one more shopping day this holiday season, if we're flat year over year we are actually down.

Or in other words, after the locusts comes the famine.
Posted by Anonymous Monetarist at 9:00 AM