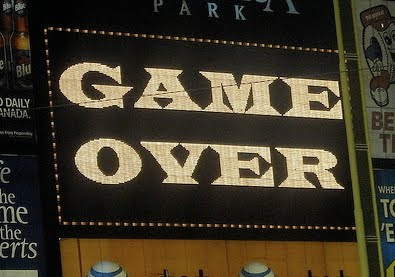 Chart via Jeff Cooper at Minyanville

How can you have any pudding,
If you don't eat your meat?
I have seen the writing on the wall.
- Pink Floyd

It is easier to stay out than get out.
-Mark Twain

One man alone can be pretty dumb sometimes, but for real bona fide stupidity, there ain't nothin' can beat teamwork.
-Edward Abbey

Only two things are infinite, the universe and human stupidity, and I'm not sure about the former.
-Albert Einstein

By Alison Vekshin and Robert Schmidt

They walked out with a sobering conclusion, according to the accounts of two attendees who requested anonymity because the meeting was private. Not only was Kanjorski serious, he planned to offer the legislation as early as next week -- and it just might pass.

Today marks a decade to the day that President Bill Clinton signed the repeal of the Depression-era Glass-Steagall Act that split investment-banking from lending and deposit-taking. Financial firms are scrambling to prevent Congress from re- imposing the act.

Lawmakers are considering breakup proposals after public outcry over the $700 billion rescue of firms including Citigroup, Bank of America Corp. and American International Group Inc. Congress passed Glass-Steagall in 1933 after speculative activities by many banks brought the system close to collapse.

“You don’t ever want to be in the situation again where something is too big to fail,” Senate Banking Committee Chairman Christopher Dodd told Bloomberg Television yesterday. The Connecticut Democrat, who unveiled a regulatory overhaul proposal this week, said the government should have the power to break apart large institutions “as a very last resort.”

Kanjorski, a member of Frank’s panel and chairman of its capital markets subcommittee, would go further by allowing the U.S. to dismantle any large firm whose size and risk-taking threaten the financial system.

Frank supports both the Kanjorski and Perlmutter plans. “I believe both will be adopted,” he said on Nov. 3.

Senator Bernie Sanders, a Vermont independent, would give Treasury Secretary Timothy Geithner 90 days to come up with a list of banks, hedge funds and insurance companies deemed “too big to fail.”

Geithner would have one year to break them up.

The proposals are a turnaround from 10 years ago, when Clinton signed the Gramm-Leach-Bliley Act. It gave rise to financial conglomerates active in retail banking, insurance, stock brokerage and proprietary trading.

John S. Reed, who headed Citicorp for 14 years before the 1998 merger with Sanford “Sandy” Weill’s Travelers Group Inc. that created Citigroup, last week apologized for his role in creating the company.

He said lawmakers were wrong to repeal Glass-Steagall, likening the separation it created to a ship with compartments so that a single leak doesn’t sink the whole vessel.
Posted by Anonymous Monetarist at 11:33 AM