Do you hear that, Mr. Anderson? That is the sound of inevitability. 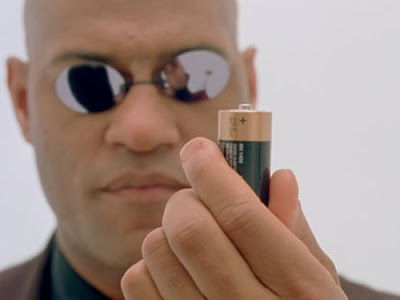 AM: Do you want to know what IT is? The Banking Economy is everywhere. It is all around us, even now in this very room. You can see it when you look out your window or when you turn on your television. You can feel it when you go to work, when you go to church, when you pay your taxes. It is the world that has been pulled over your eyes to blind you from the truth.

AM: That you are a debt slave. Like everyone else you were born into bondage, born into a prison that you cannot smell or taste or touch. A prison for your mind.... Unfortunately, no one can be told what the Banking Economy is. You have to see it for yourself. This is your last chance. After this there is no turning back. You take the blue pill, the story ends, you wake up in your bed and believe whatever you want to believe. You take the red pill, you stay in Wonderland, and I show you how deep the rabbit hole goes.... Remember, all I'm offering is the truth, nothing more....

Have you ever had a dream, J6P, that you were so sure was real. What if you were unable to wake from that dream. How would you know the difference between the dream world and the real world?

Deflation: When the volume of money and credit falls relative to the volume of goods available, the relative value of each monetary unit increases, making prices of goods generally fall. In order to understand that dynamic, we have to look at it in real terms.

Because we’re built and trained to think in a linear fashion, and because the unit of money we accept as the medium for exchange -- the dollar -- is divorced from the reality of tangible goods, we tend to over-focus on nominal prices when what's most important are real prices.

Let’s talk about the difference.

The real interest rate, which is what really matters, is the cost to borrow money in the present versus what that money will likely be worth in the future.

To get this we can take the cost of money in the present (the interest rate at which that money is loaned to us) and subtract it from a future gauge of what money is likely to be worth, so, say the T-Bill rate with the Consumer Price Index subtracted from it.

At present, that gives us the T-Bill rate .3% minus CPI, which is last reported at -1.3%, which gives us real interest rate of positive 1.6%. It's true, that’s quite low, but only for banks because banks are the only borrowers able to access credit at that real rate. It’s why stocks are rising, and why credit markets appear to be improving, and it explains why Treasury yields remain so low, because that simply expresses the necessary conditions for the carry trade: borrowing money at low nominal and real rates, and investing it in higher yielding instruments.

But let’s back up for a moment. Let’s consider a measure of the "real" economy, the one that is functioning outside of the closed circle of the banking system. Instead of the T-Bill rate, let’s look at the 15-year fixed-mortgage rate (at 4.3%), less a burden of debt proxy like home prices since a huge amount of the liquidity(credit) that gets to the REAL economy goes through the mortgage market.

We’ll be generous and use the best-case current housing price estimate of -5%. In that case our real rates are an extraordinarily high 9.3%.

So, we have two economies; the one the Fed and Treasury can control -- namely, the "Banking Economy" -- and the one they cannot because it is too large -- the “Everything Else” economy.

(Someday the time will come to make a choice Mr. Anderson -AM)

But wait, there’s more: While social mood continues to transition to negative and we see increasing expressions against the "Banking Economy" (conventional wisdom is that we’re all being screwed over by the fat cats and banking elites), the irony is that this closed system WILL INEVITABLY FAIL. It is without question. The only question is how long the façade can last. That could be another two years, it could be another five years.

Why is that ironic? Because for the rest of us in the real economy -- the one that's too large to control -- we’re being forced to repair our balance sheets, forced to save, forced to prepare for lower prices at the same time the other economy is doing everything within its closed system to postpone the inevitable deflation.

Essentially, they're standing around, grouped in a circle, feasting off one another. Eventually, the real economy will overwhelm the false economy, and the so-called banking elite will be replaced by new actors and a new financial ecosystem will emerge.

This isn't to say that the closed Banking Economy is taking place without cost to the rest of us, but simply to point out that the longer banks are unwilling to lend (and I'd argue that it's more the case that they're unable to lend), the better off we'll be. Eventually, time preferences and social mood trends will reverse to positive.

(WIKI: In Neoclassical economics the rate of time preference is usually taken as a parameter in an individual's utility function which captures the trade off between consumption today and consumption in the future, and is thus exogenous and subjective. It is also the underlying determinant of the real rate of interest. The rate of return on investment is generally seen as return on capital, with the real rate of interest equal to the marginal product of capital at any point in time. Arbitrage, in turn, implies that the return on capital is equalized with the interest rate on financial assets (adjusting for factors such as inflation and risk). Consumers, who are facing a choice between consumption and saving, respond to the difference between the market interest rate and their own subjective rate of time preference ("impatience") and increase or decrease their current consumption according to this difference. This changes the amount of funds available for investment and capital accumulation. -AM)

This is where we get to the end game. Initially, without question, deflation will win. But -- and this is where people really fail to grasp the key distinctions between credit, money, and inflation versus deflation -- when enough credit has been destroyed, eventually currency inflation, perhaps even hyperinflation, will begin. The point, however, is that the end result is precisely the same whether we’re talking about inflation or deflation. Namely, the destruction of money and credit.
Posted by Anonymous Monetarist at 4:32 PM