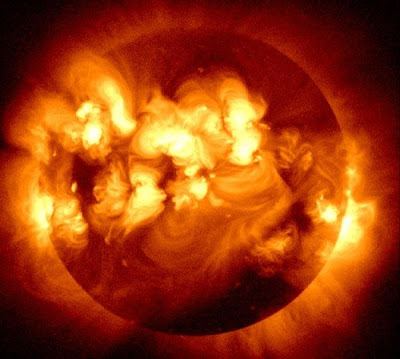 It doesn't look like much from the outside—just a drab, 10-story building on the campus of Lawrence Livermore National Laboratory, about an hour's drive east of San Francisco. But as I'm walking across the parking lot on a sunny day in October I can't help thinking that someday I might be telling my grandchildren about the time I came to this lab and met Edward Moses and saw the technology that was about to change the world.

Maybe this means I'm an optimist. Or even a sucker; a fool. All I know is that when I meet Moses, the 60-year-old scientist who runs this place, and he shows me a tiny pellet, about the size of the multivitamin I take every morning, and swears it will provide an endless supply of safe, clean energy, I want to believe him. It seems so ridiculously simple, so utterly doable. The pellet Moses holds is a model, but the real version will contain a few milligrams of deuterium and tritium, isotopes of hydrogen that can be extracted from water. If you blast the pellet with a powerful laser, you can create a reaction like the one that takes place at the center of the sun. Harness that reaction, and you've created a star on earth, and with the heat from that star you can generate electricity without creating any pollution. Forget about nuke plants, coal, oil, or wind and solar.

"This is the real solar power," says Moses.

What Moses is talking about is controlled nuclear fusion—fusing nuclei rather than splitting a nucleus, as happens in ordinary nuclear-fission power plants. In a fission reaction, the nucleus of a uranium atom is split into two smaller atoms, releasing energy in the form of heat. The heat is used to make steam, which drives a turbine and generates electricity. In fusion energy, the second half of this process (heat makes steam makes electricity) remains the same. But instead of splitting the nucleus of an atom, you're trying to force a deuterium nucleus to merge, or fuse, with a tritium nucleus. When that happens, you produce helium and throw off energy.

Scientists have been trying to produce energy with fusion for decades. So far, they keep failing. It's not that fusion itself can't be achieved. Fusion takes place in every hydrogen-bomb explosion. The trick is controlling fusion so that instead of a one-time blast you get a series of tiny, controllable explosions. The joke is that fusion energy is only 40 years away, and will always be only 40 years away.

Moses believes, however, that his lab, which is called the National Ignition Facility, or NIF, has cracked the problem. The big challenge fusion has faced is lack of power. Even the biggest lasers in the world could not generate enough energy to smash nuclei together and make them stick. But the reason the building we're in is so huge—it covers the area of three football fields—is that it contains an enormous laser, or actually a system that combines 192 identical lasers and zaps them into a round chamber, about 30 feet in diameter, where the tiny pellet of fuel awaits the blast. NIF's laser, which took a decade to build and was completed earlier this year, can produce 60 times more energy than any other laser ever built. Right now it's still being tested. But next year Moses and his scientists will fire it up with a full load of deuterium-tritium fuel, and Moses feels confident it will achieve "ignition," meaning a controlled burn in which you get out more energy than you put in. Moses, an award-winning laser scientist with a wry sense of humor, explains the whole thing as he leads me on a tour through the NIF facility. It's a vast, beautiful, awe-inspiring machine, mind-blowing in its complexity, with miles of metal tubes—all part of a system that starts with a tiny pulse of light, channels that light through machines that amplify its intensity and rocket the beam along using specially grown crystals and thousands of lenses and mirrors, and finally focuses these beams down to hit a target that is the size of a peppercorn—all in one millionth of a second.

His boss, George Miller, the director of Lawrence Livermore, holds a doctorate in physics and is well aware of the difficulties Moses must overcome. "Nothing is a sure game until you've actually done it," he says. But he makes the case for trying. "You have to build NIF to find out whether or not this is going to work."

He's got a point. Big technological breakthroughs require taking big risks. They always seem hopeless and expensive—until they work. Sequencing the human genome seemed impossible until thousands of researchers around the world got it done—in 13 years, with $3 billion in government funding, plus investments by private companies. Like the genome project, fusion energy is something that requires a long-term sustained effort.

And if Moses is right, and NIF succeeds, well, the scientists at NIF will go down in history. That is why labs in Japan, France, the U.K., and China are all pursuing fusion energy too. For his part, Moses really seems not to harbor any doubt. Yes, there are lots of big technical challenges; but one by one, his team is ticking them down, he says. "If someone offered me the job to build a commercial prototype fusion plant and they said, 'You've only got 10 years,' I'd take that job," Moses says.

He and a colleague have already branded the product they're building—they call it Laser Inertial Fusion Energy, or LIFE, a name that at least indicates that some scientists also know a bit about marketing. Moses believes that by 2020 utility companies could be building prototype power plants called "LIFE engines." By 2030, he says, real fusion plants could be up and running, and by 2050 they could be common. By 2100, as many as 1,000 fusion reactors could be operating in the United States, if utilities embrace the technology and invest in it.

If Moses is right, this may be the biggest technological breakthrough of the century. Fusion would be a disruptive technology like the Internet, touching every part of the economy. In March of this year, when Moses and his team fired up the giant laser, they were able to produce more energy than anyone ever had before—just over a megajoule, which, Moses says, "was like breaking the four-minute mile." NIF fires the laser only a few times a day, and scientists are blasting capsules that contain just a tiny bit of deuterium and no tritium. The idea is to test the system and bring it up slowly. Moses says it's like getting behind a Ferrari for the first time; you go easy at first. In a few months NIF will move to a more potent fuel capsule that contains tritium and just a tiny bit of deuterium. By the fall of 2010 the team aims to start blasting capsules that contain the full dose of -deuterium-tritium fuel, and they will crank up the laser power to 1.4 megajoules.

If all goes well, by 2012 NIF will produce what Moses calls "a repeatable, re-liable platform."

(By the way, the Mayan calendar was designed to be cyclical, so the fact that the long count comes to an end in December 2012 ain't no big thing. Simply, it is the end of a great calendar cycle in Mayan society, no different than our Millenium. Thinking of planning an Armageddon Happy Hour on Friday, December 21st. If the world ends I'll pick up the tab for everyone.-AM)
Posted by Anonymous Monetarist at 10:54 AM