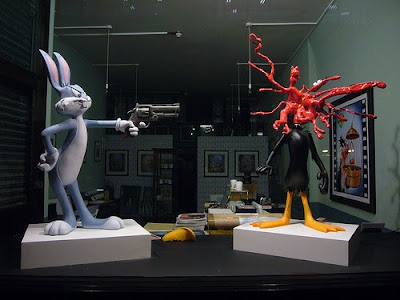 'What do you think the Devil is going to look like if he's around? Nobody is going to be taken in if he has a long, red, pointy tail. No. I'm semi-serious here. He will look attractive and he will be nice and helpful and he will get a job where he influences a great God-fearing nation and he will never do an evil thing... he will just bit by little bit lower standards where they are important. Just coax along flash over substance... Just a tiny bit. And he will talk about all of us really being salesmen. And he'll get all the great women.'
-Aaron Altman (Broadcast News)

'Have you ever had a dream, Neo, that you were so sure was real? What if you were unable to wake from that dream? How would you know the difference between the dream world and the real world?'
-Morpheus

'Now those memories come back to haunt me they haunt me like a curse. Is a dream a lie if it don't come true? Or is it something worse?'
-Bruce Springsteen

As mentioned in FT weekend, it is slightly more profitable to be amoral, but even more so to be immoral.

Qn.som.yale.edu :In stocks, vice outperforms virtue, according to the study “Sin Stock Returns” by Frank Fabozzi. Fabozzi and his co-authors created a portfolio of stocks in six vice industries — adult entertainment, alcohol, biotech, gaming, tobacco, and weapons industries — across 21 countries and tracked its performance against stock market index returns. The average sin stock produced an annual return of 19.02% compared to an annual average stock market return of 7.87%. The sin portfolio also outperformed the market in 35 of the 37 years tracked.

The struggle of virtue and vice is writ large as the debate between deflationistas and debasionistas. Ones' lens depends on what one means by ones' ends. The deflationistias mean that deflation is the midwife of hyperinflation. The debasionistas mean that America's resilient wealth exporting machine will import higher asset values. The former pines for reason before farce, the latter embraces the tragedy.

This ends with bubbles, in gold and equities. And then a crash and then more bubbles.

Most probably we break the 2007 downtrend next year and bounce off the 1982 uptrend.

If we break the 1982 uptrend, we really risk a hyperinflationary episode for deflation is the hemlock of the elites.

The higher the lower and the lower the higher. The cycle of strife, as it were.

Hobbes first law of nature is that every man ought to endeavour peace, as far as he has hope of obtaining it; and when he cannot obtain it, that he may seek and use all helps and advantages of war.

The dollar is the bullet, the Fed is the weapon. The key to the gun cabinet is for Members Only.
Posted by Anonymous Monetarist at 10:41 AM

Bard of the Bears, Your headline is sort of iambic pentameter. Very stylish.

And according to Mr. Google, tis never been expressed within the GoogleBot's vision ...

Such an appellation needs an appropriate dedication ...

To QE, or not to QE: that is the question:
Whether 'tis nobler in the markets to suffer
The slings and arrows of outrageous fortune,
Or to halt QE against a sea of troubles,
And by opposing end the rally?

To short: to buy;
No more; and by buy to say we end
The heart-burn of the thousand little trades
That this office is heir to, 'tis a consummation
Devoutly to be wish'd.

Your blog is one of the most intelligent and original I've ever come across.

Thanks ... you are quite kind.